THIS could take down liberal Hollywood forever - The Horn News 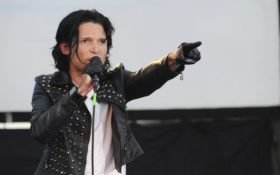 A former Hollywood child star has vowed to take down Hollywood pedophiles entirely — and if the alleged child sexual abuse ring reaches as high as suspected, it could undo liberal Hollywood forever.

Actor and 1980s movie icon Corey Feldman has announced that he is planning to make a documentary that will expose the network of pedophiles working in Hollywood, and the Los Angeles Police Department has launched their own investigation.

In a YouTube video, the former “Goonies” star explained that he is aiming to raise $10 million to fund the documentary and he will be providing a “honest and true depiction of child abuse” within the liberal industry.

“What I am proposing is a plan that I believe can literally change the entertainment system as we know it. And I believe that I can also bring down, potentially, a pedophile ring that I have been aware of since I was a child,” Feldman said.

He adds that, “Right off the bat, I can name six names, one of them who is still very powerful today. And a story that links all the way up to a studio. It connects pedophilia to one of the major studios.”

Feldman had made claims that he childhood career was ended abruptly when he began campaigning against industry pedophiles that had abused him as a child.

If you eat THIS, you’re growing deadly tumors [Sponsored]

He went on to explain that, “Ever since I discussed the fact that I have this plan, my life has turned to utter chaos.”

“I’ve been silenced my whole life, but just over the past few days since I made that announcement, I’ve been arrested, I had a near-death experience last night where I felt like I was almost going to be killed. Two trucks came speeding at me at the same time on a crosswalk.”

The Truth Campaign started by Feldman has raised over $100,000 already, which will help to finance the production and distribution of his documentary.

The 46-year-old filed a report with the LAPD regarding alleged sexual abuse by powerful Hollywood men.

He even was courageous enough to speak publicly on one of the creepy men that assaulted him.

During an appearance on Dr. Oz last week, Feldman named his “License to Drive” costar John Grissom as one of his alleged molesters. Grissom has served time in the past for another child molestation case.

Feldman revealed that in 1993 he had filed a police report naming the molesters at the Santa Barbara Police Department, but they claim to have no record of the conversation.

Luckily for Feldman, the LAPD has launched an investigation into his claims.

He took to Twitter to express his thoughts on the matter —

The actor’s wife Courtney Anne Mitchell expressed that Feldman’s Truth Campaign is “Much bigger than raising finance for a film. This is about the balance of Good and Evil in very real terms,” she wrote.

“Corey and I fear for our safety, and we need protection to get this truth out.”

—Kylie Handler is a News Editor for The Horn News