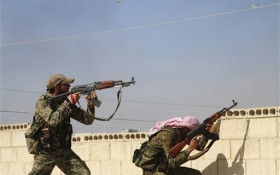 DAMASCUS, Syria (AP) — Russian jets intensified their airstrikes Monday in central Syria as government forces battle insurgents in a strategic area near a rebel-held province and a government stronghold.

The government push is the latest in a bid to regain the Sahl al-Ghab plain, which is adjacent to Latakia province, a stronghold of President Bashar Assad and the Alawite religious minority to which he belongs.

After a heavy barrage of Russian airstrikes, the fighting was focused on the village of Kfar Nabudeh, which officials said had been seized by government troops. Activists said Syrian rebels repelled the attack.

Capturing Kfar Nabudeh would cut off a major highway, giving the pro-government forces access to the northwestern province of Idlib. A rebel coalition that includes the al-Qaida-affiliated Nusra Front drove Assad’s forces out of Idlib in September, in a major setback for the government. Their hold on the province threatened Latakia.

The Russian Defense Ministry said it has struck 53 alleged Islamic State targets in the past 24 hours, destroying command centers, ammunition and fuel depots as well as training camps allegedly used by foreign militants. The ministry said the IS positions were in the central provinces of Homs and Hama, as well as in Latakia and Idlib. IS has a limited presence in Hama, away from where the fighting has been concentrated.

Russia insists it is mainly targeting the IS group and other “terrorists,” but the multi-pronged ground-and-air offensive is being waged in areas controlled by mainstream rebels as well as the Nusra Front. The government ground offensive began on Oct. 7, a week after Russia began its airstrikes.

The Britain-based Syrian Observatory for Human Rights said at least 30 airstrikes were carried out in Kfar Nabudeh, while government troops and Lebanon’s Hezbollah fighters entered the village from the south. Another activist-run monitoring group, the Shaam News Network, said the insurgents ambushed government forces inside the village, which is reportedly laden with tunnels.

During the last six days of ground operations, government troops have seized at least two villages in eastern Hama province, Atshan and Tal Sukayk, and a third in the plain area. Activists say rebels seized a village south of Idlib.

The Russian defense statement said its jets have hit mortar positions around Tal Sukayk in the last 24 hours, as well as a training camp for foreign militants in Mastouma, in Idlib. The ministry said it used Su-34, Su-24M and Su-25SM planes to strike the targets.

“The terrorists in the past days were desperately trying to transport ammunition, armaments, fuel and supplies from Raqqa to the front line,” the ministry said, in reference to the northern province controlled by the Islamic State group, adding that a “significant part” of their supplies have been destroyed by Russian airstrikes.

The Syrian military statement also said troops gained control of an area in rural Aleppo province. It was not immediately clear whether the area had previously been controlled by IS or other insurgents.

In a separate development, the French Defense Ministry said it cannot confirm whether some French citizens were killed in its airstrikes last week on the IS group’s de facto capital, Raqqa.

“We know that this camp aimed at training combatants to attack Europe or France. Some of them might be French citizens or French speakers,” the ministry said in a statement Monday. The ministry said it could not yet confirm details about the strikes.

France joined the U.S.-led coalition against the Islamic State group in Iraq last year and expanded its campaign to Syria last month. Britain has acknowledged its airstrikes targeted citizens in Syria.

The Observatory’s chief Rami Abdurrahman said 16 militants were killed in the airstrike, and there were no reports of French citizens among them. One of those killed was believed to be Belgian, he said.