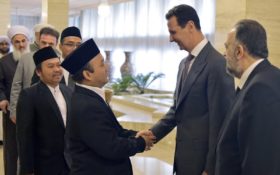 Syrians braced for a possible U.S. attack in retaliation to an alleged chemical assault that killed dozens over the weekend as activists reported Wednesday that government forces vacated strategic potential targets, including air bases around the country.

The Foreign Ministry in Damascus denounced President Donald Trump’s threat to attack the country as “reckless” and a danger to international peace and security.

The statement was the latest in a war of words raging between Washington and Moscow since Saturday’s suspected chemical attack on the rebel-held town Douma, just outside Damascus, which killed more than 40 people according to activists and first responders.

Syria and its ally Russia deny such an attack happened.

Amid the unprecedented tension between the two former Cold War adversaries, the Syrian Observatory for Human Rights said the Syrian government evacuated forces from a number of air bases around the country.

There was no immediate comment from Syrian officials. But Damascus allies had confirmed that precautionary measures were being taken throughout Syria.

Trump’s threat of retaliatory military action prompted a slew of Russian comments warning that U.S. strikes could trigger a direct military clash between them. Trump took to Twitter on Wednesday, vowing that “smart” missiles “will be coming.”

France said it would consider a response with the United States and Britain. Saudi Arabia said it would support a military operation in Syria.

Civilians in government-held areas in Syria expressed a mix of fear and defiance. Social media pages were flush with defiant comments, mostly from government supporters, some lamenting Syria’s perpetual conflict while others taunted Trump to go through with his threats.

“They have threatened us a thousand times. Let them go through with it or shut up,” said a participant in an online poll asking if Syrians were afraid of a U.S. attack.

“We have become accustomed to such threats that aim to frighten the Syrian people,” said Marwan Ghata, 66, an engineer. “We will not leave our houses and our army is ready to retaliate.”

But away from social media, many expressed concern.

One woman who refused to be identified because of fear for her security described herself as “trembling” and said she stocked up on food and is considering not sending her kids to school. Others said they have readied underground basements for cover.

“People say Trump is insane and he would like carry out his threats,” the woman said.

The Syrian pound lost nearly 10 percent of its value on prospects of an American attack, going from about 430 Syrian pounds to the dollar last week to 469 Wednesday.

A similar chemical attack last year that killed more than 80 people in northern Syria prompted a limited U.S. retaliation that targeted an air base from which aircraft involved in the strike likely deployed from.

In its statement, the Foreign Ministry, repeated its line that Washington’s allegations were “unsubstantiated” and that the alleged chemical attack is being used as a pretext to target Syria.

“We are not surprised by this reckless escalation from a regime like the one in the United States, which has and continues to sponsor terrorism in Syria,” the ministry said, adding that statements from Washington lack “wisdom and logic” and endanger international peace and security.

By inviting the international chemical weapons watchdog to send a fact-finding mission to Syria, the government claimed it proved it was innocent of the allegations of using chemical weapons.

Russia’s ambassador to Lebanon Alexander Zasypkin said any missiles fired at Syria would be shot down and the launching sites targeted.

“If there is a strike by the Americans, then … the missiles will be downed and the source of the missiles targeted,” Zasypkin told Hezbollah’s Al-Manar TV station.

Europe’s airspace authorities warned aircraft to be careful when flying close to Syria because of possible military action.

The Eurocontrol airspace organization said that the European Aviation Safety Agency had sent a “Rapid Alert Notification” that flight operators needed to consider the possibility of air or missile strikes on Syria within the next 72 hours.