Swiss scientists invent new sparkling chocolate (would you eat this?) - The Horn News 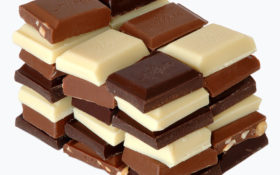 Scientists in Switzerland have found a way to make brown chocolate colorful, without adding further ingredients.

The Swiss Federal Institute of Technology said Thursday that researchers discovered a method to imprint a special structure on the surface of chocolate that makes it shimmer and shine like a rainbow.

The university said the process mimics the effect of chameleon skin, which can change to display specific colors.

It said the rainbow chocolate is ready for industrial production and the scientists are already in talks with big chocolate makers.