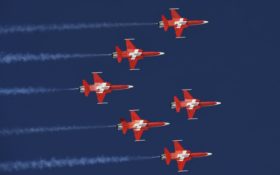 The commander of the Swiss air force’s aerial display team has apologized after his unit performed a low-altitude pass over the wrong municipality.

Residents of Langenbruck looked up in vain Saturday while expecting to see Switzerland’s Patrouille Suisse squadron swoop by to mark the centenary of the death of local aviation pioneer Oskar Bider.

The team flew over nearby Muemliswil instead.

Switzerland’s Defense Ministry said Monday that the formation hadn’t practiced the maneuver and got distracted by an unauthorized helicopter in the area. The ministry says the team leader spotted what he thought was a tent for the Langenbruck celebration that turned out to be for a yodeling festival in Muemliswil.