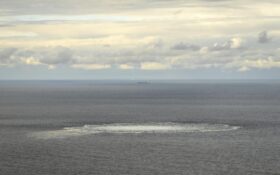 Sweden’s domestic security agency said Thursday that its preliminary investigation of leaks from two Russian gas pipelines in the Baltic Sea “has strengthened the suspicions of serious sabotage” as the cause and a prosecutor said evidence at the site has been seized.

The Swedish Security Service said the probe confirmed that “detonations” caused extensive damage to the Nord Stream 1 and Nord Stream 2 pipelines last week. Authorities had said when the leaks off Sweden and Denmark first surfaced that explosions were recorded in the area.

The agency, which said what happened in the Baltic Sea was “very serious,” didn’t give details about its investigation.

But in a separate statement, Swedish prosecutor Mats Ljungqvist said “seizures have been made at the crime scene and these will now be investigated.”

Ljungqvist, who led the preliminary investigation, did not identify the seized evidence. Ljungqvist said he had given “directives to temporarily block (the area) and carry out a crime scene investigation.”

Now that the initial probe is completed, a blockade around the pipelines off Sweden will be lifted, he said.

The governments of Denmark and Sweden previously said they suspected that several hundred pounds of explosives were involved in carrying out a deliberate act of sabotage. The leaks from Nord Stream 1 and 2 discharged huge amounts of methane into the air.

Last week, undersea explosions ruptured Nord Stream 2 and its sister pipeline, Nord Stream 2, at two locations off Sweden and two off Denmark. The pipelines were built to carry Russian natural gas to Germany.

Danish authorities said the two methane leaks they were monitoring in international waters stopped over the weekend. One of the leaks off Sweden also appeared to have ended.

Russian President Vladimir Putin accused the West of attacking the pipelines, which the United States and its allies have vehemently denied, noting that Russia has the most to gain in wrecking havoc on Europe’s energy markets.

Separately the Swedish coast guard said “the remaining emissions is more or less unchanged,” and that it was returning to its ordinary environmental rescue operations.