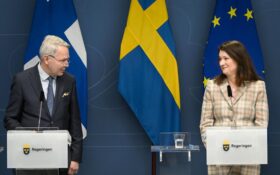 Sweden’s coalition government wants to cut red tape when it comes to dancing by abolishing a decade-old requirement for restaurants, nightclubs and other venues to obtain permits before they let patrons shimmy and sway.

The proposal made Thursday means that venues no longer would need a license to organize dances. Instead, as a general rule, they would only have to register with the police, which can be done verbally and does not cost anything.

Applying for a permit incurs a fee of at least 700 kroner ($67) for the establishment. As it is now, owners can lose their liquor and business licenses if police officers come by and find out that a venue did not have authorization to let patrons dance.

“It is not reasonable for the state to regulate people’s dance,” Justice Minister Gunnar Strömmer said in a government statement. “By removing the requirement for a dance permit, we also reduce bureaucracy and costs for entrepreneurs and others who organize dances.”

Swedish media outlets welcomed the move to abolish the dance permits, which have been called outdated and moralistic.

The government proposed having the change take effect on July 1, although it requires parliamentary approval.

In 2016, the Swedish parliament voted unanimously to do away with the permits but the requirement still exists in law and is enforced. Swedish broadcaster SVT said that for the past 20 years, lawmakers from every party except the Social Democrats have favored abolishing the permits.