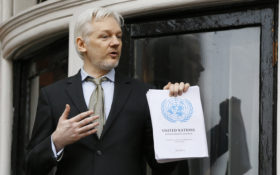 WikiLeaks founder Julian Assange woke up to good news today. Swedish prosecutors have dropped their investigation into a rape allegation against Assange, almost seven years after it began and five years after the WikiLeaks founder sought refuge inside Ecuador’s London embassy.

But he’s not in the clear yet.

Assange’s Swedish lawyer Per E. Samuelson declared Friday that “this is a total victory for Julian Assange. He is now free to leave the embassy when he wants.”

Legal experts, however, say that’s not true. The situation is more complicated than that.

Assange has not been exonerated; he could still be arrested. The investigation began after two women accused Assange of sexual offenses during a 2010 visit to Stockholm. Sweden asked Britain to extradite Assange for questioning, and in June 2012 he sought refuge in Ecuador’s London embassy to avoid arrest.

After that, the investigation stalled. Swedish prosecutors dropped cases of alleged sexual misconduct when the statute of limitations ran out in 2015, leaving only the rape allegation.

Marianne Ny, the Swedish director of public prosecutions announced Friday that she was dropping the rape case because there is no prospect of bringing Assange to Sweden “in the foreseeable future” and it is “no longer proportionate” to maintain the European arrest warrant.

She told a news conference in Stockholm that the investigation could be reopened if Assange returns to Sweden before the statute of limitations lapses in 2020.

Additionally, it is not safe for Assange to leave the embassy. Sweden has revoked a European Arrest Warrant for Assange, so British police are no longer seeking him for extradition. But there is also a warrant issued by a British court after he skipped bail in June 2012.

London’s Metropolitan Police force says that it “is obliged to execute that warrant should he leave the embassy.” The maximum sentence for that offense is a year in prison.

Sponsored: Are the government and church conspiring to keep THIS hidden?

But there may be other charges filed against Assange once he’s arrested. The WikiLeaks founder suspects there is a secret U.S. indictment against him for the publication of leaked classified American documents, which has infuriated U.S. officials. CIA Director Mike Pompeo has branded WikiLeaks a “hostile intelligence service,” and Attorney General Jeff Sessions said last month that Assange’s arrest is a priority.

WikiLeaks’ release of classified material has continued unabated during Assange’s five years in the Ecuadorean embassy. On Friday, the group released what it said were new details of CIA cyberespionage tools.