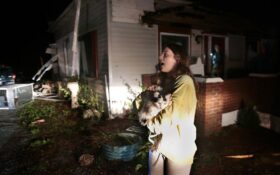 A suspected tornado damaged buildings and knocked out power in communities along the state line between Missouri and Illinois, and damage was reported in other parts of the states from severe weather.

One suspected tornado moved Sunday night through St. Mary, Missouri, about 55 miles (88 kilometers) southeast of St. Louis, before crossing the Mississippi River into Chester, Illinois, the National Weather Service reported. There were no immediate reports of severe injuries.

A large fall storm system developed Sunday over the central part of the country and strengthened as it passed over the St. Louis region, weather service meteorologist Jared Maples, based in St. Charles, Missouri, told The Associated Press on Monday. The storms dropped heavy rain, leading to some flooding around tributaries and in low-lying areas, and spawned several suspected tornadoes in eastern Missouri and southwestern Illinois.

“There’s structures around the Farmington and Fredericktown area of Missouri that have been hit,” Maples said. “Chester, Illinois, is another area that was hit hard.”

The weather service is sending out survey teams to confirm whether those areas were hit by tornadoes, he said.

Felix Meyer, Ste. Genevieve County emergency management director, told the St. Louis Post-Dispatch that St. Mary, which has several hundred residents, was without power. Power outages were reported in some other Missouri communities, as well as in parts of Illinois.

Tina Lowry was in bed and her sister was in the living room when they heard a whooshing sound Sunday night. Lowry said she took shelter in her closet and her sister hunkered down in the bedroom as the home was ripped apart. Vehicles also were destroyed by the storm.

Across the river in Illinois, Chester fire Chief Marty Bert said the main damage in the community was confined to power lines and downed trees. Wind ripped off part of the roof at Three Springs Lodge nursing home, but all the residents were safe, he said.

In Fredericktown, a storage building was leveled, the Post-Dispatch reported, and other buildings lost roofs and had their windows cracked.

Earlier Sunday, video from a KMBC-TV helicopter captured a funnel cloud forming near Kansas City around the Missouri community of Kingston. There appeared to be some damage on the ground, the station reported.

The severe weather in the Midwest came as a powerful storm barreled toward Southern California after flooding highways, toppling trees and causing mud flows in areas burned bare by recent fires across the northern part of the state. Drenching showers and strong winds accompanied the storm.

The system that hit the Midwest continued east into the Ohio Valley on Monday, said weather service meteorologist Alex Elmore, who is based in St. Charles.

“It has weakened as it moves east,” Elmore said. “There is a chance of severe weather later Monday in the Carolinas and portions of Virginia, Kentucky and Tennessee.”

Forecasters are expecting more stormy weather later in the week. On Tuesday afternoon, parts of Kansas, Oklahoma and Texas could see severe storms, according to the Storm Prediction Center in Norman, Oklahoma. Forecasters said those storms could bring large hail, strong winds and isolated tornadoes.