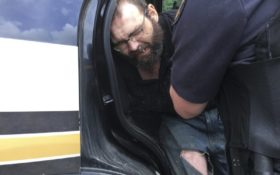 Looking haggard and defeated after two days on the run from a massive manhunt, a suspect in the slaying of a deputy was arrested Friday by a single state trooper with no use of force, authorities said.

The Tennessee Bureau of Investigation tweeted photos of a handcuffed Steven Joshua Wiggins, grimacing as he was placed into the back seat of a law enforcement vehicle. His clothes were muddy and his jeans were ripped open.

Authorities said Wiggins was being booked into jail wearing the handcuffs of Dickson County sheriff’s Sgt. Daniel Baker, who was found dead in his car on Wednesday.

The state of Tennessee will seek the death penalty against Wiggins and a woman arrested the day before on charges of first-degree premeditated murder, District Attorney General Ray Crouch Jr. announced.

Trooper Kevin Burch was driving down a road Friday morning when he saw a man near the edge of the wood line matching the description of Wiggins, who has a lengthy arrest record and tattoos on both arms, they said. He approached the suspect, who was considered armed and dangerous, with his service weapon drawn, but Wiggins was “totally obedient” as he was arrested, Tennessee Highway Patrol Col. Dereck Stewart said.

Baker was killed after responding to a call about a suspicious car on Wednesday, the TBI said. Baker couldn’t be contacted for some time, but the deputy’s car was eventually tracked by GPS to a wooded area 2 or 3 miles away. The deputy was found dead inside of it.

The TBI said a video recording enabled them to identify Wiggins as the suspect. Federal, state and local authorities searched for Wiggins over two days, checking into hundreds of tips.

“He was able to hide for an extended period of time,” Stewart said. It’s not clear where Wiggins hid or how he evaded authorities.

Burch found Wiggins not far from where the shooting occurred. Rewards totaling $46,000 had been offered for information leading to his arrest.

Dickson County Sheriff Jeff Bledsoe said Baker, 32, was one of their best, working his way up to sergeant on patrol during 10 years with the department.

Baker, who also served in the U.S. Marine Corps Reserve, is survived by his wife and daughter. Bledsoe said his agency lost a brother, and the community lost a hero. The sheriff broke down as he read a statement from Baker’s wife thanking law enforcement and others for the manhunt.

“I would like to ask our family, friends and community to help our daughter, Meredith, to always know how wonderful and amazing her father is,” the statement said. “His service and dedication to his country and community will always be remembered.”

Wiggins had been already wanted on charges that he assaulted a woman and stole her car when he was pulled over Wednesday, according to a report from the Kingston Springs Police Department.

That woman was in the car with Wiggins when he pulled the trigger, and is now jailed on a murder charge in Baker’s death, according to court documents.

The report says 38-year-old Erika Castro-Miles told police early Tuesday that Wiggins had slapped her in the face and pulled out some of her hair, then put a gun to her head and threatened to kill her if she called police. She said he then grabbed her keys and took her car without her permission.

Castro-Miles also told police Wiggins had been “doing meth all night and smoking marijuana.” She told police she planned to press charges, the report said.

The next day, she was sitting in the car with Wiggins when he shot the deputy, according to an affidavit filed in Dickson County court.

She fled the shooting scene Wednesday and hid under a house, the affidavit says. Now she’s in the Dickson County Jail.

Both Wiggins and Castro-Miles are being held without bail, the district attorney’s statement said.