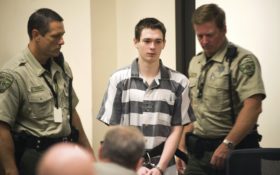 A 19-year-old man has pleaded not guilty to charges that he opened fire at a northern Illinois high school last month.

Matthew Milby Jr. entered his plea Thursday in Lee County. He faces felony gun charges and is being held in jail on $2 million bond.

Milby is accused of taking a semi-automatic rifle to Dixon High School on May 16 as graduation practice was taking place in the gym. Authorities allege that Milby, who was a member of the graduating class, fired at a gym teacher and was running away when he was confronted by school resource officer Mark Dallas.

Milby is accused of firing at Dallas. Dallas returned fire, striking him in the shoulder and the hip. Neither Dallas nor the gym teacher was injured.