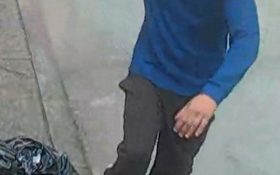 New York City police on Wednesday said the suspect, identified as 41-year-old Juan Rodriguez, was seen on surveillance video hurling bricks or other objects at 42 LinkNYC kiosks in Manhattan over the last week.

One of the videos, recorded April 16 by a camera on a kiosk near Times Square, shows a bearded man in a blue, long-sleeve T-shirt walking up and tossing a brick at the camera.