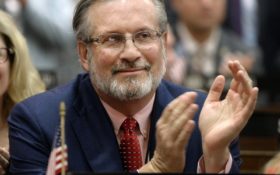 The sole survivor of a deadly 2007 home invasion is considering running for a congressional seat held by a Democrat under fire for her handling of harassment complaints in her office.

Dr. William Petit Jr., who was severely wounded in the home invasion that killed his family, is among a growing list of potential candidates eyeing the seat held by U.S. Rep. Elizabeth Esty, who’s in her third term. Esty, amid calls for her resignation, announced on Monday she would not seek re-election in November.

Petit told the Hartford Courant via text that he’s in “a lot of discussions with many folks.”

Romano contends that Republicans have a good chance of winning the seat, which Esty has held since 2012.

“At the end of the day, this is a district that is a tossup district,” he said.

The viciousness of the July 23, 2007, home invasion in Cheshire, which is just outside the district, upended notions of suburban security, delayed the abolition of the state’s death penalty and drew comparisons to the 1959 killings portrayed in Truman Capote’s “In Cold Blood.”

Two paroled burglars broke into the Petits’ home after dark and terrorized the family for hours. Petit’s wife, Jennifer Hawke-Petit, was strangled. Their daughters, 17-year-old Hayley and 11-year-old Michaela, were tied to their beds and died of smoke inhalation. Hawke-Petit and Michaela were sexually assaulted, and Petit was beaten.

The two killers, who blamed each other, were sentenced to death but had their sentences changed to life in prison without parole.

Petit moved back to his hometown, Plainville, after the killings and has represented Plainville and New Britain since 2017. A retired endocrinologist, he sits on the General Assembly’s Public Health, Appropriations and Commerce committees. He also oversees a foundation that honors the memory of his family.

Former Meriden Mayor Manny Santos is the only declared Republican candidate in the race. Former Simsbury Mayor Mary Glassman has announced she plans to seek the Democratic nomination. Other Democrats also are considering runs for the office.