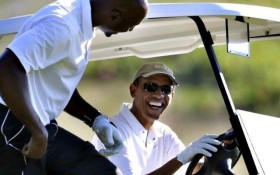 The Fourth of July holiday is over, but you’re still paying for a family vacation — even if you didn’t take one.

Former President Barack Obama’s family may be out of office, but taxpayers are still footing the bill for their vacations… and you will be for life.

The Obamas began a nine-day vacation in Indonesia on June 30 by rafting along a river in a luxurious resort in Bali.

It was a homecoming for Obama, who grew up attending school there.

But taxpayers are footing the bill for this family trip down Memory Lane. Under the Former Presidents Act, the president and his wife are allowed $1.5 million a year in travel expenses, not including their security detail and lavish, lifelong pension.

It’s good to be the king, or even the former king.

How much Americans are paying for the Obamas’ getaway is a mystery. In fact, we don’t even know how much we spent on their jet-setting lifestyle when he was in the Oval Office!

Partial records from the Secret Service and the Air Force show that the Obamas’ vacations while in office cost U.S. taxpayers almost $100 million.

For eight years the Obamas lounged around the most elite hot spots and watering holes of the liberal establishment: Martha’s Vineyard, Aspen, and Key Largo. Michelle Obama and the girls, Sasha and Malia, took vacations all their own to exotic locations like Spain, Morocco, Liberia — dropping millions of dollars, over and over again.

The Obamas always indulged in the very best that other people’s money could buy, including their trips to:

That arrangement is hardly fair to struggling taxpayers, who may have had to skip taking a vacation this summer — maybe the last few summers.

But even this record is far from complete.

Judicial Watch has filed a Freedom of Information Act (FOIA) request for more expense records of the Obamas’ trips as far back as 2014. These cover Barack Obama’s trip to Los Angeles, where he traded jokes on ABC’s “Jimmy Kimmel Live,” and two appearances at Hillary Clinton campaign rallies in the closing days of her losing 2016 presidential campaign.

That’s quite a tab for a man who promised he’d never go on vacation if he was elected president.

Obama said in 2008 that anyone who runs for president swears to the American people that his “need for sleep, family life, vacations, leisure, is gone. I am giving myself to you.”

But once in office, Obama’s leisure time managed to break records. He squeezed in more time for golf than any president who had ever held office — 186 rounds on the links by 2014, according to The Daily Caller.

At the same time, his passport collected more foreign stamps than other presidents. By 2014, the Obamas had taken 31 international trips — almost three-times as many as Ronald Reagan at the same point in his presidency.

Since leaving office, the Obamas have traveled to Palm Springs, the British Virgin Islands, and Tahiti. And it’s not just the Obamas who travel.

They bring an entourage — including a Secret Service detail that he’s promised for the rest of his life, all at taxpayer expense.

“Many in the media would only focus on President Trump’s travel, but Barack Obama continues to cost taxpayers with his luxury travel, and we aim to get the facts,” Fitton said.

But while he’s getting the facts, American taxpayers are still stuck with the bill.