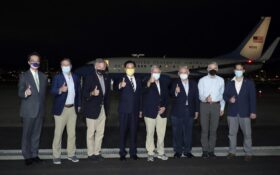 The Communist Chinese Party was reportedly left furious after a delegation of six U.S. lawmakers led by Republican Lindsey Graham from South Carolina secretly arrived in Taiwan on Thursday for a two-day visit.

Their trip has already been denounced by China.

The U.S. lawmakers, almost all Republicans, are to meet with Taiwanese President Tsai Ing-wen and the island’s defense minister. The visit is “again a demonstration of the U.S.’s ‘rock solid’ support and commitment to Taiwan” amid a “severe” situation in Ukraine, the island’s Ministry of Foreign Affairs said in a statement.

The visit follows an announcement last week that U.S. House of Representatives Speaker Nancy Pelosi would visit Taiwan. However, Pelosi’s trip was postponed after she tested positive for COVID-19.

In Beijing, Chinese Foreign Ministry spokesperson Zhao Lijian denounced the visit on Thursday, saying “China is firmly opposed to any form of official exchanges between the U.S. and Taiwan.”

Taiwan is a self-ruled island claimed by China as part of its territory. China’s People’s Liberation Army sends fighter jets flying toward the island on a near-daily basis.

“Relevant U.S. lawmakers should abide by the one-China policy upheld by the U.S. government. The U.S. should … stop official contacts with Taiwan, and avoid going further down the dangerous path,” Zhao said at a daily briefing.