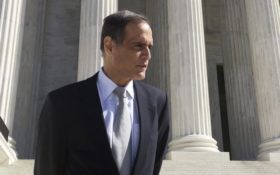 A man who has been an outspoken critic of the south Florida city where he lives is now 2-0 in disputes with the city before the Supreme Court.

The Supreme Court on Monday sided with Fane Lozman in a lawsuit that began with his 2006 arrest at a City of Riviera Beach city council meeting. Lozman, who also won a case against the city at the Supreme Court in 2013, was arrested while talking about corruption in the county during a public comment portion of the meeting.

Lozman, 56, argued he was arrested in retaliation for being a critic of the city and sued. But a lower court said Lozman was barred from bringing a lawsuit for retaliation because a jury found a police officer had probable cause to arrest him for disturbing a lawful assembly. The Supreme Court disagreed, with Justice Anthony Kennedy writing in an 8-1 decision that Lozman’s lawsuit isn’t barred. Justice Clarence Thomas dissented.

“What happened to me was wrong. It happens all the time to public speakers. This is going to tell municipalities that you’re not immunized from legal actions. There is a price to pay,” Lozman said in a telephone interview after the decision was announced.

The decision doesn’t end the case. Kennedy wrote that an appeals court should look at several issues when re-evaluating the case, directing the court to use as guidance a previous case that Lozman had advocated. The appeals court could rule in Lozman’s favor or against him, said Miami-based attorney Kerri L. Barsh, one of Lozman’s attorneys.

It’s also possible the case could settle. Lozman said part of what’d he’d want is an apology and for the city to pay his legal fees and other costs, which now are over $200,000.

The city didn’t immediately respond to a request for comment.

Lozman was arrested on Nov. 15, 2006 after he began using the meeting’s public comment time to talk about government corruption in Palm Beach County, where the City of Riviera Beach is located. He kept speaking after a member of the council warned him not to continue with the topic. The charges against him were ultimately dismissed, but Lozman then turned around and sued the city.

Lozman claimed the city violated the First Amendment’s free speech guarantee by arresting him in retaliation for his criticism of city officials and policies and a separate lawsuit he’d filed against the city.