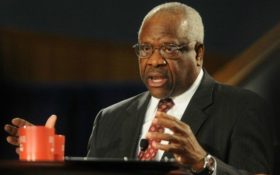 Rumors have swirled among mainstream media pundits that Supreme Court Justice Clarence Thomas was preparing to retire in June — a move that would give President Donald Trump a third nomination to the high court.

Thomas announced Monday, though, that he isn’t ready to hang up his robe anytime soon.

Any reports that he’s set to retire is simply fake news, the George H.W. Bush-nominated justice told the audience attending an event by the Supreme Court Historial Society on Monday.

Thomas said his wife became aware of the rumors of his pending retirement recently, and he felt the need to address them.

“I have no idea where this stuff comes from. One of the things you have to get used to in this business … is that people can say things about you — and speak for you — that have nothing to do with you.” Thomas said.

“I enjoy being here, I enjoy my work,” he said in the light-hearted interview.

The 70-year-old Thomas later said he planned on working for “20 or 30” more years — and that his most near-term plan was an RV trip with his wife over the summer.

Thomas says he enjoys the anonymity of driving through middle America’s “fly over” states in his RV. But he admitted that every now and then, a fellow RV enthusiast will ask if he’s aware that he resembles Clarence Thomas.

Justice Clarence Thomas on retirement rumors: "I have no idea where this stuff comes from. One of the things you have to get used to in this business…is that people can say things about you and for you that have nothing to do with you." #SCOTUS