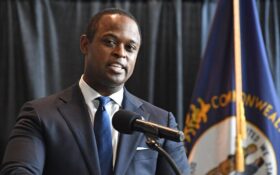 The Supreme Court on Monday agreed to hear an appeal from Kentucky’s attorney general, who wants to be allowed to defend a restriction on abortion rights that lower courts had struck down.

It is the first major challenge to Roe v. Wade, which legalized abortion and has been a target of conservatives for decades, since conservatives took control of the court under former President Donald Trump.

The underlying issue in the case, to be heard in the fall, is a blocked Kentucky law that abortion rights supporters say would have effectively banned a standard abortion method in the second trimester of pregnancy.

But the issue before the court is whether Attorney General Daniel Cameron, a Republican, can intervene in the case, after rulings from a trial court and appellate panel, as well as Democratic Gov. Andy Beshear’s decision to drop the case.

The law was adopted in 2018, when Republican Matt Bevin was governor. Following a lawsuit by abortion providers, a trial court permanently blocked the law, finding it would have made it impossible to perform the abortion procedure known as dilation and extraction. A panel of the 6th U.S. Circuit Court of Appeals upheld that ruling in June 2020.

Five days later, the Supreme Court ruled 5-4 to strike down an unrelated Louisiana law regulating abortion clinics. But Cameron, who became attorney general in 2019, said the reasoning used by the high court called into question the ruling against the Kentucky law.

The appeals court, however, rejected his efforts to intervene, prompting his appeal to the Supreme Court.

“I promised Kentuckians that I would defend our laws all the way to the United States Supreme Court, and that’s what we’ve done,” Cameron said in a statement.

The American Civil Liberties Union, representing the abortion clinic that had sued over the law, had urged the court to stay out of the case.

“This case is only about whether the Attorney General, after having sat on the sidelines of this lawsuit, can jump in at the last minute in an effort to revive an unconstitutional law,” ACLU lawyer Andrew Beck said in a statement.

In February, Kentucky’s Republican-led legislature gave Cameron the power to seek civil and criminal penalties for any violation of Kentucky’s abortion laws. Beshear had initially vetoed the measure.