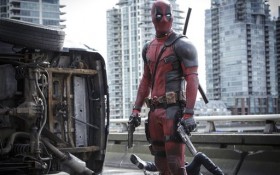 The R-rated “Deadpool” has taken the box office by storm, annihilating records with an eye-popping $135 million from its first three days in U.S. theaters, according to comScore estimates Sunday.

Analysts are predicting that the Tim Miller-directed film, which cost a mere $58 million to produce, could go on to make $150 million by the end of the holiday weekend. As recently as Thursday, “Deadpool” was expected to pull in only $80 million across the three days, but the Marvel comic, often a best-seller, proved its popular appeal and then some — and it didn’t have to compromise with a PG-13 rating either.

“This movie is the very definition of an expectation-buster. Nobody saw this coming,” said Paul Dergarabedian, comScore’s senior media analyst. “It doesn’t feel like a cookie-cutter superhero movie. It feels like something unique. You’ve got to sometimes take risks and go against conventional wisdom to come out a winner.”

IMAX screens accounted for an estimated $16.8 million of “Deadpool’s” total. The film, notably, was not released in 3D.

“Deadpool” also had a massive showing internationally, bringing in an estimated $125 million from 62 territories for a $260 million global total.

The debut is also a bit of a superhero redemption story for Reynolds whose costly “Green Lantern” adaptation disappointed audiences and at the box office in 2011.

Coming in a distant second was last weekend’s No. 1 film “Kung Fu Panda 3” with $19.7 million, which fell only 7 percent. The DreamWorks Animation film has earned $93.9 million in just three weeks in theaters.

In third place, the R-rated Dakota Johnson and Rebel Wilson rom-com “How to Be Single” didn’t make any big waves with its $18.8 million out of the gates. The Warner Bros. film cost $38 million to produce and provided some counter programming to the hyper violent “Deadpool.”

The dismally reviewed Ben Stiller comedy “Zoolander 2,” meanwhile, debuted in fourth place to only $15.7 million. The Paramount film, which Stiller directed, cost around $50 million to make. The first film, “Zoolander,” opened in 2001, just weeks after the Sept. 11 attacks, to a meek $15.5 million and went on to gross only $45.2 million in North America. It found a second life on home video, though and has become a quotable cultural staple. Audiences seem less enthusiastic this time around, though.

Dergarabedian thinks that both “How to Be Single” and “Zoolander 2” could see a healthy uptick from the Valentine’s Day crowd Sunday.

But overall, the box office is healthy, up an estimated 3.2 percent from last year and it’s all thanks to the snarky, fourth-wall-busting “Deadpool” and its historic debut.

“These are summer numbers,” Dergarabedian said. “It’s summer in February.”

Estimated ticket sales for Friday through Sunday at international theaters (excluding the U.S. and Canada), according to comScore:

Universal and Focus are owned by NBC Universal, a unit of Comcast Corp.; Sony, Columbia, Sony Screen Gems and Sony Pictures Classics are units of Sony Corp.; Paramount is owned by Viacom Inc.; Disney, Pixar and Marvel are owned by The Walt Disney Co.; Miramax is owned by Filmyard Holdings LLC; 20th Century Fox and Fox Searchlight are owned by 21st Century Fox; Warner Bros. and New Line are units of Time Warner Inc.; MGM is owned by a group of former creditors including Highland Capital, Anchorage Advisors and Carl Icahn; Lionsgate is owned by Lions Gate Entertainment Corp.; IFC is owned by AMC Networks Inc.; Rogue is owned by Relativity Media LLC.