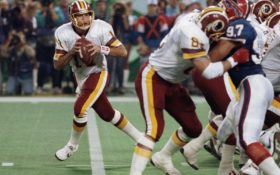 Former Super Bowl hero Mark Rypien, who announced last year that he believes he suffered brain damage while playing in the NFL that caused him to behave violently at times, pleaded not guilty Monday to a charge of domestic violence against his wife, Danielle.

Rypien was taken to the Spokane County Jail on Sunday afternoon after his arrest near a bank on the north side of the city. A witness who saw the couple called police and said Rypien’s wife said he had struck her. She was evaluated and did not need medical treatment, police said.

Rypien, 56, was released without bail; his next court appearance was scheduled for July 31. Prosecutors initially asked for a no-contact order between Rypien and his wife at the brief hearing, but she argued against that.

Mark and Danielle Rypien said in a statement Monday that they will continue to cooperate with authorities “to ensure that the truth of Mark’s innocence comes out,” KHQ-TV reported .

“In response to Mark being arrested for domestic violence, we want you to know that he did not commit any crime. As a family we are deeply concerned about the situation. Occurrences like this one are often chaotic scenes which are not conducive to revealing full clarity about what actually transpires,” they said in the statement.

There was no answer at the Spokane offices of the Rypien Foundation, which battles childhood cancer. Rypien’s attorney, Chris Bugbee, did not immediately return a telephone message.

Rypien announced last year he believes he has Chronic Traumatic Encephalopathy, caused by repeated concussions while playing in the NFL. He said he believes this condition caused him to have erratic and violent behavior.

“I’ve been down the darkest path,” he said last year. “I’ve made some horrible, horrible mistakes.”

Rypien said that in the past he has attempted suicide, hired prostitutes and suffers from persistent depression and anxiety.

He was a lead plaintiff among 4,500 former players who won a settlement related to CTE in 2013.

In the statement Monday, the Rypiens said Mark suffering from what they suspect is CTE does leave them with some challenging situations to navigate with the assistance of a team of professionals. “This, however, was not one such situation and we are confident that in the coming weeks, clarity about this unfortunate situation will be provided.”

Rypien was the most valuable player of Super Bowl XXVI after the 1991 season as the Washington Redskins beat the Buffalo Bills.

In a lengthy interview with The Spokesman-Review newspaper last year, Rypien acknowledged that he was also involved in a domestic violence incident with his wife in 2017.

“I got angry and I threw her on the bed a couple of times,” Rypien said. He and his wife blamed a medication change for his behavior.

A high-school quarterback in Spokane who went on to star at nearby Washington State University, Rypien was drafted by the Redskins in 1986. He played in four games during his last season in the NFL with the Indianapolis Colts in 2001, although he did not play between 1998 and 2000.

Numerous NFL players have reported a wide variety of problems related to CTE, including homelessness, erratic behavior, suicide and other early deaths.