Sued for singing ‘Happy Birthday’? Not anymore! - The Horn News 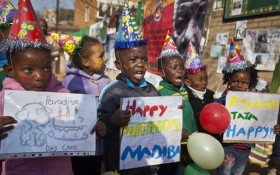 The music publishing company that has been collecting royalties on the song “Happy Birthday To You” for years does not hold a valid copyright on the lyrics to the tune that is one of the mostly widely sung in the world, a federal judge ruled Tuesday.

U.S. District Judge George H. King determined the song’s original copyright, obtained by the Clayton F. Summy Co. from the song’s writers, only covered specific piano arrangements of the song and not its lyrics. The basic tune of the song, derived from another popular children’s song, “Good Morning to All,” has long been in the public domain.

King’s decision comes in a lawsuit filed two years ago by Good Morning To You Productions Corp., which is working on a documentary film tentatively titled “Happy Birthday.” The company challenged the copyright now held by Warner/Chappell Music Inc., arguing that the song should be “dedicated to public use and in the public domain.”

“Because Summy Co. never acquired the rights to the ‘Happy Birthday’ lyrics, defendants, as Summy Co.’s purported successors-in-interest, do not own a valid copyright in the Happy Birthday lyrics,” King concluded in his 43-page ruling.

In his ruling King went into great detail about the history of “Happy Birthday To You” and its derivation from “Good Morning to All.”

That song was written by sisters Mildred Hill and Patty Hill sometime before 1893, the judge said, adding that the sisters assigned the rights to it and other songs to Clayton F. Summy, who copyrighted and published them in a book titled “Song Stories for the Kindergarten.”

“The origins of the lyrics to Happy Birthday (the ‘Happy Birthday lyrics’) are less clear,” the judge continued, adding the first known reference to them appeared in a 1901 article in the Inland Educator and Indiana School Journal.

The full lyrics themselves, King said, didn’t appear in print until 1911.

Since then, they have become the most famous lyrics in the English language, according to Guinness World Records. The song is also sung in countless other languages around the world.

Warner/Chappell, which eventually acquired the song’s copyright from Summy, argued that its predecessor had registered a copyright to “Happy Birthday To You” in 1935 that gave it the rights to all of the song.

“Our record does not contain any contractual agreement from 1935 or before between the Hill sisters and Summy Co. concerning the publication and registration of these works,” the judge said.