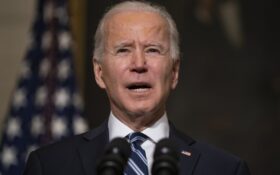 During his Monday interview on Newsmax TV with host Sean Spicer, Miller announced he was filing a lawsuit against the Biden administration over discrimination in their American Rescue Act.

“I am very proud to be on your program tonight for the exclusive first interview to announce our lawsuit against the Biden administration over the American Rescue Act,” Miller told Spicer and co-host Lyndsay Keith. Miller said that federal dollars to farmers was based on discriminatory factors.

“That is fundamentally un-American. Look, millions of people were hurt by this pandemic … as a result of the closures, shutdowns, and disruption to our lives,” he said, but recovery should be for everyone. “We can’t be a unified country… an equal country… if we split by race.”

“America First Legal has just filed suit in Texas. Our plaintiff is Syd Miller, the Texas agriculture commissioner,” Miller said. “My organization, America First Legal, that I founded along with … other leading lights of the Trump administration is going to be the conservative response to the ACLU.”

Miller said his organization’s goal is to defend constitutional values and the rights and freedoms of Americans that have been “too long ignored because of the radical left attack on our judicial system.”

“So what are the other big issues that you guys see on the horizon that you’ll tackle?” Spicer asked Miller about America First Legal’s upcoming goals.

Miller said his legal organization would fight racial discrimination, illegal immigration at the Southern border, and the “right to life.”

You can see the announcement here —

BREAKING: Trump Senior Advisor @StephenM announces his lawsuit against the Biden administration, over discrimination of farmers and ranchers based on skin color. @seanspicer @LyndsayMKeith https://t.co/VlT7z8drtO pic.twitter.com/lTBaJ2AmUf