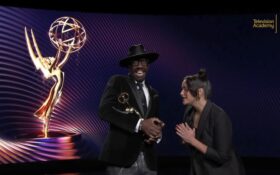 “Succession” received a leading 25 Emmy nominations Tuesday, but the satirical drama about the rich and ruthless has a landmark rival in “Squid Game,” the first non-English language series to vie for television’s top honor.

“Squid Game,” a South Korea-set drama in which the poor are fodder for brutal games, earned a best drama nomination and 13 other bids for September’s Emmy Awards. “Succession” captured the best drama trophy and eight other awards when it last vied for Emmys, in 2020.

“Ted Lasso” was the top comedy series nominee with 20 bids and has the chance to earn its second consecutive best comedy trophy, as academy voters proved undeterred by its sophomore season turn to the emotional dark side.

Other top nominees included the tropical resort-set anthology dramedy “The White Lotus,” which also received 20 nominations; the comedies “Hacks” and “Only Murders in the Building” with 17 bids each, and teenage dysfunction drama “Euphoria.” Its star, Zendaya, was crowned best actress in 2020 was nominated again.

Departing series that might have expected salutes were instead snubbed, including the beloved family drama “This Is Us” received one bid, for original music and lyrics, while an equally beloved family comedy, “black-ish,” earned costume and hairstyling nominations. “Ozark,” which wrapped its run last season, fared better, with 13 bids including best drama series.

The crowd-pleasing and acclaimed “ Abbott Elementary” made a splashy debut in its first year, earning a best comedy nod and a lead acting bid for its creator, Quinta Brunson.

The other nominees for best comedy series are “Barry”; “Curb Your Enthusiasm”; “Hacks”; “The Marvelous Mrs. Maisel”; “Only Murders in the Building”; “Ted Lasso” and “What We Do in the Shadows.”

Television Academy President Frank Scherma kicked off the nomination announcement by saying that a record number of shows had been submitted, which reflects that series production was an all-time high after being drastically reduced during the pandemic.

The Emmys once were dominated by broadcast networks and then cable, with the rise of streaming services changing the balance of power and perhaps the awards themselves. Netflix’s “Squid Game” joining the Emmy mix is the result of streaming’s global marketplace focus.

“The Crown,” which dominated the 2021 drama awards, wasn’t televised within the eligibility period and is sitting this year out.

The Emmy ceremony is set for Sept. 12 and will air on NBC, with a host yet to be announced.