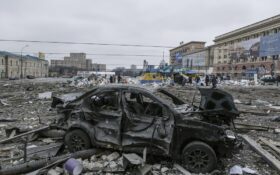 On social media, more shocking videos from the fighting have gone viral (shared below).

Ukrainian authorities said five people were killed in the attack on the TV tower, which is a couple of miles from central Kyiv and a short walk from numerous apartment buildings. A TV control room and power substation were hit, and at least some Ukrainian channels briefly stopped broadcasting, officials said.

Zelenskyy’s office also reported a powerful missile attack on the site of the Babyn Yar Holocaust memorial, near the tower.

At the same time, a 40-mile convoy of hundreds of Russian tanks and other vehicles advanced slowly on Kyiv in what the West feared was a bid by Russian President Vladimir Putin to topple Ukraine’s government and install a Kremlin-friendly regime.

Russian forces pressed their assault on other towns and cities across the country, including the strategic ports of Odesa and Mariupol in the south.

Day 6 of the biggest ground war in Europe since World War II found Russia increasingly isolated, beset by tough sanctions that have thrown its economy into turmoil and left the country practically friendless, apart from a few nations like China, Belarus, and North Korea. 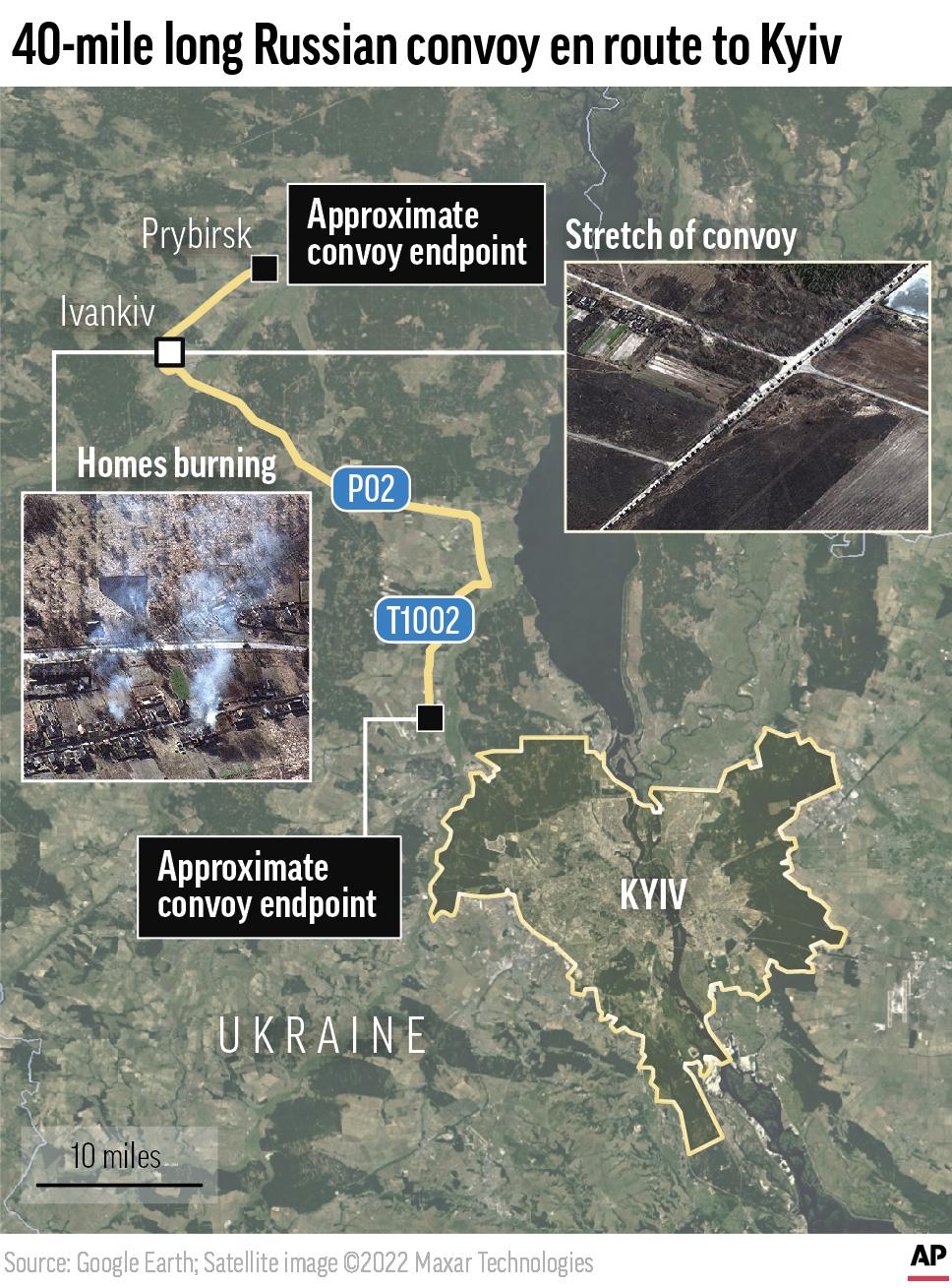 Many military experts worry that Russia may be shifting tactics. Moscow’s strategy in Chechnya and Syria was to use artillery and air bombardments to pulverize cities and crush fighters’ resolve.

The bombing on the TV tower came after Russia announced it would target transmission facilities in the capital used by Ukraine’s intelligence agency. It urged people living near such places to leave their homes.

Overall death tolls from the fighting remained unclear, but a senior Western intelligence official estimated that more than 5,000 Russian soldiers have been captured or killed.

Britain’s Defense Ministry said it had seen an increase in Russian air and artillery strikes on populated urban areas over the past two days. It also said three cities — Kharkiv, Kherson, and Mariupol —were encircled by Russian forces.

In Kharkiv, with a population of about 1.5 million, at least six people were killed when the region’s Soviet-era administrative building on Freedom Square was hit with what was believed to be a missile.

The attack on Freedom Square — Ukraine’s largest plaza, and the nucleus of public life in the city — was seen by many Ukrainians as brazen evidence that the Russian invasion wasn’t just about hitting military targets but also about breaking their spirits.

The bombardment blew out windows and walls of buildings that ring the massive square, which was piled high with debris and dust. Inside one building, chunks of plaster were scattered, and doors, ripped from their hinges, lay across hallways.

“People are under the ruins. We have pulled out bodies,” said Yevhen Vasylenko, an emergency official.

Zelenskyy pronounced the attack on the square “frank, undisguised terror” and a war crime. “This is state terrorism of the Russian Federation,” he said.

In an emotional appeal to the European Parliament later, Zelenskyy said: “We are fighting also to be equal members of Europe. I believe that today we are showing everybody that is what we are.”

He said 16 children had been killed around Ukraine on Monday, and he mocked Russia’s claim that it is going after only military targets.

“Where are the children? What kind of military factories do they work at? What tanks are they going at?” Zelenskyy said.

Human Rights Watch said it documented a cluster bomb attack outside a hospital in Ukraine’s east in recent days. Local residents also reported the use of the weapons in Kharkiv and the village of Kiyanka, The Kremlin denied using cluster bombs.

If the allegations are confirmed, that would represent a new level of brutality in the war and could lead to even further isolation of Russia.

Unbowed by Western condemnation, Russian officials upped their threats of escalation, days after raising the specter of nuclear war. A top Kremlin official warned that the West’s “economic war” against Russia could turn into a “real one.”

Inside Russia, a top radio station critical of the Kremlin was taken off the air after authorities threatened to shut it down over its coverage of the invasion. Among other things, the Kremlin is not allowing the fighting to be referred to as an “invasion” or “war.”

More than a half-million people have fled the country, and countless others have taken shelter underground. Bomb damage to water pipes and other basic services have left hundreds of thousands of families without drinking water, U.N. humanitarian coordinator Martin Griffiths said.

“It is a nightmare, and it seizes you from the inside very strongly. This cannot be explained with words,” said Kharkiv resident Ekaterina Babenko, taking shelter in a basement with neighbors for a fifth straight day. “We have small children, elderly people, and frankly speaking it is very frightening.”

The U.N. human rights office said it has recorded 136 civilian deaths. The real toll is believed to be far higher.

A Ukrainian military official said Belarusian troops joined the war Tuesday in the Chernihiv region in the north, without providing details. But just before that, Belarusian President Alexander Lukashenko said his country had no plans to join the fight.

In Kharkiv, explosions burst one after another through a residential area in a video verified by The Associated Press. In the background, a man pleaded with a woman to leave, and a woman cried.

Hospital workers moved a Kharkiv maternity ward to a bomb shelter. Amid mattresses piled up against the walls, pregnant women paced the crowded space, accompanied by the cries of dozens of newborns.

Russia’s goals in hitting central Kharkiv were not immediately clear. Western officials speculated that it is trying to pull in Ukrainian forces to defend the city while a larger Russian force encircles Kyiv.

Russian troops continued to press toward the capital, a city of nearly 3 million. The leading edge of the convoy was 17 miles (25 kilometers) from the center of the city, according to satellite imagery from Maxar Technologies.

A senior U.S. defense official described the long convoy as “bogged down,” saying Russia appeared to be pausing and regrouping to re-evaluate how to retake the momentum in the fighting.

Overall, the Russian military has been stalled by fierce resistance on the ground and a surprising inability to completely dominate Ukraine’s airspace.

The immense convoy, packed together along narrow roads, would seemingly be “a big fat target” for Ukrainian forces, the senior Western intelligence official said on condition of anonymity.

“But it also shows you that the Russians feel pretty comfortable being out in the open in these concentrations because they feel that they’re not going to come under air attack or rocket or missile attack,” the official said.

Ukrainians used whatever they had to try to stop the Russian advance. On a highway between Odesa and Mykolaiv in southern Ukraine, residents piled tractor tires filled with sand and topped with sandbags to block convoys.

The streets of central Kyiv lay almost deserted with residents ordered to stay in shelters. With an armored column miles long bearing down on the Ukrainian capital, Russia warned Kyiv residents to flee their homes https://t.co/bBgOM1tMUG pic.twitter.com/q8psMyx7dN

Video apparently showing a Russian helicopter being shot down, possibly over the Kyiv Reservoir. The video claims two but I only saw one helicopter going into the water. https://t.co/jXNq2rSE3i pic.twitter.com/B9cCL2hf60