STUNNING! Some GOOD news from D.C. (for once!) - The Horn News 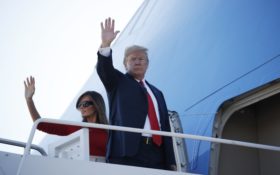 One of the key reasons Americans elected Donald Trump in 2016 was his promise to put “America First.”

The president promised to seal the border, stop U.S. soldiers from dying in foreign wars, and bring back jobs.

But the average American has to wait 26 months to receive HUD assistance—and in areas clogged with illegal aliens, like Los Angeles, the lag time is more than four years.

Most of the people waiting for a spot to open up are seniors, disabled people, and young families with children.

While Americans are living on the street, it’s “open sesame” for illegals!

Trump has had enough, and he’s bringing American citizens in from the cold.

“We’ve got our own people to house and need to take care of our citizens,” a Trump administration official told The Washington Times. “As illegal aliens attempt to swarm our borders, we’re sending the message that you can’t live off of American welfare on the taxpayers’ dime.”

President Trump has said his first priority is taking care of American citizens, especially deserving Americans who can’t get help because there are too many illegals on welfare rolls.

“I don’t want to have anyone coming in” from another country “that’s on welfare,” President Trump said from the Oval Office last month.

It’s a huge—and expensive—problem, and it’s not just housing. Non-citizens are about twice as likely to use welfare programs as American citizens, according to the Center for Immigration Studies.

Even Hollywood airheads like Cher understand it’s time that this country starts “caring for its own.”

Illegal immigrants aren’t supposed to receive welfare at all. Only U.S. citizens are eligible for federal housing funds under section 214 of the Housing and Community Development Act.

But Bill Clinton wrote a huge loophole into the law: As long as one member of a family—like an anchor baby—is a U.S. citizen, the parents get to live in the same house.

The government ripped another hole in the law when it let some people sign up for benefits as “non-contending” applicants: They could refuse to answer whether they are legal residents or not and still get benefits on a sliding scale.

It’s sort of a “Don’t Ask, Don’t Tell” policy for illegals in Section 8.

Now Trump is forcing the country to obey the law again…and the liberals are losing their minds.

Radical open-borders extremists are howling, even though the new rule hasn’t been released yet and won’t be finalized for months.

Not forcing American citizens to pay for illegals’ welfare is “cruel” and will “destabilize communities,” according to left-wing activist Diana Yentel of the National Low Income Housing Coalition.

But their real problem is that they know it’s working.

Trump released a similar proposal in 2017. He said that anyone likely to end up on welfare would have a harder time becoming a permanent U.S. resident.

Guess what happened next? Welfare rates dropped like a rock.

The caseloads for food programs in 18 states went down by 20 percent.

That means at least one out of every five dollars spent on welfare is being transferred from an American citizen to a foreigner, courtesy of Uncle Sam.

But officials say the drop is thanks to Trump’s tough stance for American citizens.

Trump wants every able-bodied American citizen working the 5.7 million open jobs in this red-hot economy. But needy Americans who can’t work deserve our help—not illegal aliens who decided the welfare system looked like a comfy place to take a nice, long siesta.

President Trump’s plans to put America First in hiring, foreign policy, and jobs is making America great again, one piece at a time.