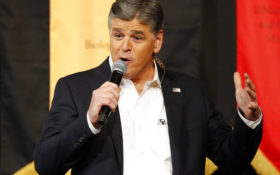 According to Hannity, sources has said that the Hillary Clinton-funded Trump-Russia dossier was paid for… by either Comey or McCabe.

In other words, the FBI potentially gained permission to wiretap the Trump Campaign… based on a faked evidence that was bought by Comey.

It could be big trouble for the former FBI bosses.

After all, the thoroughly debunked 35-page dossier was used, along with other evidence, by Comey as the reason he needed a wiretap warrant from the Foreign Intelligence Surveillance Court, known as FISC.

“If the Hillary Clinton bough- and-paid-for Russian propaganda was used to obtain a FISC warrant… what happens then?” Hannity asked Ohio Rep. Jim Jordan, a Republican.

“There’s three fundamental questions,” Jordan replied. “One: Did the FBI pay Christopher Steele, the author of the dossier?”

“Wait, one question at a time,” Hannity interrupted before turning to reporter Sara Carter. “Sara, I’m hearing from sources that either Comey or McCabe paid… do you hear the same?”

“I’m hearing both stories, Sean,” Carter, an award winning investigative journalist, replied. “That’s why we have to verify this. There’s a possibility they did play. I’m hearing from other sources they did not pay. And that’s a very important question.”

So how do we settle this issue and find the truth? Rep. Jim Jordan had an idea.

“Sarah’s right, that’s why we want the documents made available to members of Congress,” Jordan said.

Did the FBI buy evidence used to obtain the warrant to wiretap Trump Tower? The American people deserve to know — make the documents public!

“We’re all entitled to see this, make it available, give us the information.” Jordan demanded.

Who do you trust more, Sean Hannity or James Comey?