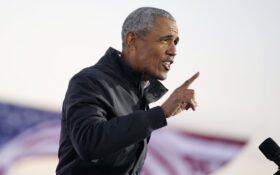 Five years after the Barack Obama administration ended, it has been implicated in a new scandal.

A former Democratic donor has blown the lid off the Deep State’s espionage and dirty money secrets in court filings that say Obama’s CIA used him to illegally spy on Congress, then set him up for jail time.

Jet-setting, Pakistani-born businessman Imaad Zuberi has been convicted of illegally funneling foreign money to U.S. politicians to change foreign policy…and now that he’s been convicted, he’s singing like a canary about his ties to the Obama White House.

He says the CIA used his business ties to do its bidding — and that he saw “flagrant problems, abuses, violations of law” by the CIA, which left him holding the bag.

Between 2011 and 2017, Zuberi gave $3 million to some of the biggest names in the political scene: Joe Biden, Kamala Harris, Barack Obama, Hillary Clinton, 2016 vice presidential candidate Tim Kaine, and powerful members of the House Foreign Affairs Committee. After Trump’s election, he donated $900,000 to Trump’s inauguration and to a few Republicans; none are accused of any wrongdoing.

Zuberi got busted working with the nation of Sri Lanka to help it improve its image in the U.S. by donating huge sums of cash to politicians… and pocketing part of their donations without reporting it to the IRS.

But there was a huge surprise waiting in Zuberi’s trial: He says the CIA squeezed him to work for them and broke the law in the process.

His legal team gave U.S. District Judge Virginia Phillips a sealed document exposing Zuberi’s “cooperation and assistance to this country has spanned over a decade.”

During this time, Zuberi wasn’t a minor league donor. He was a bundler for Hillary Clinton’s 2016 run — meaning he collected a large amount of money from multiple other donors, who agree on a cause == and he served on the campaign finance committees of Clinton and Obama.

The CIA saw him as someone who could get their work done. First, the CIA pumped Zuberi for information about his meetings with the most elite government and industry leaders in the Middle East and Asia. Then, the spy agency escalated things by asking him to use his global business connections to do favors for them.

Multiple sources who had seen the document told JustTheNews.com that the CIA asked Zuberi to get information or try to influence U.S. congressmen. “The CIA is not supposed to target, spy on or influence members of Congress,” the website reports.

The CIA also used Zuberi in an undercover operation overseas that was run under the cover of a journalistic group. “The CIA is not supposed to use journalism organizations or journalists for operational cover,” the website adds.

Then, Zuberi says, the CIA set him up to take the fall. His former CIA handler joined Zuberi’s work on behalf of Sri Lanka… the work that got him indicted under the Foreign Agent Registration Act.

Another CIA handler asked Zuberi to have his laptop, so he could delete all evidence of Zuberi’s ties to the CIA. Zuberi was later charged with obstruction of justice for deleting those emails.

When the authorities closed in, Zuberi admitted to breaking campaign finance laws, influence peddling for foreign powers, and tax evasion.

A judge sentenced him to 12 years in prison, which is “notably tough for a guilty plea by someone without a record,” former federal prosecutor Ken White told The Wall Street Journal.

For comparison, Paul Manafort only got seven-and-a-half years for his ties to foreign nations, which predated his work for Donald Trump.

In other words, the Deep State reportedly used Zuberi to spy on or influence U.S. Congressmen, violated intelligence laws, then directed the illegal actions that got him 12 years in prison.

At least a few CIA officials seem to be siding with him.

Robert Eatinger, one of the top lawyers at the spy agency, joined Zuberi’s legal team. And Jose Rodriguez filed an affidavit asking the court to give Zuberi a light sentence… most likely, due to his service of for the CIA.

Eatinger filed a report with the CIA’s Acting Inspector General claiming the CIA—mostly during the Obama administration—committed “serious or flagrant problems, abuses, violations of law or executive order, or deficiencies relating to the funding administration or operations of an intelligence activity.”

That’s a far cry from Barack Obama’s claim that there was never “a smidgen” of scandal during his presidency.

But it also raises another question: If the Obama administration can set up one of its top donors, who rendered years of service to its ends, who else is the Deep State planning to set up?