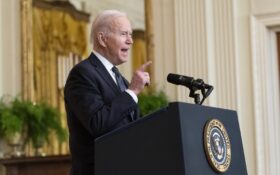 If you feel like life was better under President Donald Trump, it’s not nostalgia or your imagination: A new study confirms that Americans felt happier and more successful under Trump than under both President Joe Biden or Barack Obama.

Today three out of four Americans say, “on the issues that matter to them, their side in politics has been losing more often than winning,” according to a new poll from Pew Research Center.

In all, 72 percent say they are losing ground under the Biden administration.

While Americans tend to be pessimistic — or politicians regularly fail them — Pew revealed the time when U.S. citizens had the greatest sense they were winning: February 2020, just before the COVID-19  pandemic, under the 45th president of the United States, Donald J. Trump. At that time, a high of 41 percent of Americans said they were winning… almost twice as many as under Trump’s successor.

It makes sense that “about eight-in-ten Republicans and Republican-leaning independents (81%) say they feel that their side is losing more often than winning politically” today, when Democrats control the House of Representatives, the U.S. Senate, and the White House. But “two-thirds of Democrats and Democratic leaners (66%) say their side is losing more than winning,” too, “up from 60% in 2021.”

Pew did not drill down into the reasons both sides felt the government is losing, but the conclusions are inescapable: As a presidential candidate in 2016, Donald Trump promised people will feel “sick and tired of winning”—and he delivered. Under President Joe Biden, many people are just feeling sick and tired.

Americans may have felt the thrill of the pre-COVID economy. Three years ago this month, the Trump administration announced that unemployment had fallen to a 50-year low of 3.5 percent. New businesses also took off.

Most importantly, real wages rose above inflation—and those at the bottom end of the income scale saw steeper gains than the wealthy under Trump.

4.1 million Americans got off the Supplemental Food Nutrition Program (food stamps) during Trump’s first two years in office—after 10 million signed up during Biden’s tenure as vice president under Barack Obama.

Having a job gave Americans hope and a purpose for the future. “For the first time in 29 years, the number of drug overdose deaths has decreased,” said Kellyanne Conway in 2020.

Things went so well under Donald Trump that Americans were living longer than ever. In 2018, one year into Trump’s tenure in office, life expectancy rose after falling for the previous three years under Barack Obama.

Life expectancy fell during Biden’s first year in office, 2021, by 0.9 years, according to the CDC.

Although Treasury Secretary Janet Yellen promised inflation would be “transitory” last October, year-on-year inflation reached a high of 9.1 percent in June and is now at 8.3 percent, the highest level since January 1982.

That doesn’t count the cost of gasoline—even before OPEC and its partners, including Russia, announced it would cut oil production by 2 million barrels a day—which had already caused Brent oil prices to rise from $80 to $92.82 a barrel…and it’s only rising.

For regular Americans, that means gasoline prices could rise to $5 a gallon again.

Biden, who always wanted to be president, now presides over supply chain shortages and stores that don’t have enough employees to stay open. Ships heavy with unloaded goods bobbed up and down outside U.S. ports, as White House spokesperson Jen Psaki cracked wise that Americans’ biggest problem was “the tragedy of the treadmill that’s delayed.” Even now, there are 10.1 million unfilled jobs in the labor market, because so many Americans got used to receiving an unemployment check and “bonus” for staying at home during the extended coronavirus pandemic.

Now, as only 35 percent of Democrats and Democrat-leaning independents want Biden to seek re-election, he’s doing his very best to win — in court, against Donald Trump. The FBI raided Mar-a-Lago and is locked in a legal battle with the former president over whether documents agents seized at Trump’s palatial residence qualify as classified.

From trade deals that benefit his son’s business partners in China, to policies that bolster his Hunter’s allies in Ukraine, to investigations of parents protesting against Biden’s campaign donors in teachers unions, Biden’s family is cashing in while he hands Americans a string of losses.

Will a Donald Trump victory in 2024 be the first lucky break in a new American winning streak?