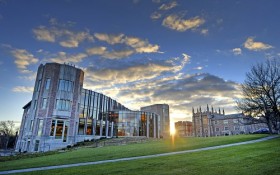 Baltimore police have arrested protesters at Johns Hopkins University where students have been staging a sit-in for more than a month to stop the university’s plans to create a private police force.

The Baltimore Sun reports police entered the building early Wednesday and began arresting students, some of whom had chained themselves to the stairs of the campus’ main administration building. The students are also protesting the school’s contracts with the U.S. Immigration and Customs Enforcement agency. They vowed to stay put until President Ronald J. Daniels negotiated with them.

News outlets report city police entered the building after asking the protesters to peacefully leave. Daniels and Provost Sunil Kumar said in a Tuesday letter that the protest constitutes criminal trespassing and may be met with suspension or expulsion.