Student: Lawmaker kicked me in the testicles! - The Horn News 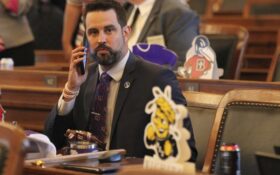 A high school student reported that a Kansas House member working as a substitute teacher manhandled him and kicked him in the testicles during class, and the lawmaker told authorities that God told him to do it, according to a sheriff’s deputy’s written statement.

The deputy’s affidavit, released to reporters Tuesday, said the boy showed him a golf ball-sized “road rash” and a 3-to-4 inch scratch on his back that he said appeared after Republican state Rep. Mark Samsel, of Wellsville, pushed him up against a classroom wall on April 28.

Samsel, 36, was charged last week with three misdemeanor counts of battery following his “rude, insulting or angry” interactions with two students, ages 15 or 16, during an art class at Wellsville High School. He has pleaded not guilty. Each of the charges is punishable by up to six months in jail.

The affidavit said Samsel acknowledged during an interview that he had “demonstrated a kick” after one boy disrupted class. He told the deputy he did not kick the boy and that the student had “embellished the heck out of it.”

The boy told the deputy that after Samsel pushed him against the wall and kicked him, “his back and testicles were in pain” for approximately 15 minutes, the affidavit said.

“I would just say that all an affidavit is, is a very brief recitation of allegations, and that they’re all allegations at this point,” said Samsel’s attorney, Christopher Scott. “He is innocent unless proven guilty.”

Samsel did not answer a phone call, and it was not possible to leave him a message Tuesday.

The Wellsville school district has banned Samsel from its property and events for a year.

There’s no indication that Samsel might face disciplinary action from the House, which can censure or expel a member, and its top Republican leaders have said the courts “must be allowed to work.”

On Monday, Scott asked the magistrate not to release the affidavit, but the judge released a redacted version.

The sheriff’s deputy said in the document that he asked the lawmaker why he had put his hands on the boy, and Samsel pointed to the ceiling. When the deputy asked Samsel whether God told him to do so, Samsel answered, “Twice.”

“He stated he knew it was wrong and he shouldn’t do it, he stated he did not want to do it,” the affidavit said. “He stated, ‘The whole world is telling me not to do it, God said, Yes.’ Mark believes this was God’s plan.”

Samsel told the deputy that he didn’t “want to do any of the things I did right there” and suggested he might end up in a psychiatric hospital “because it has all the appearance of a psychotic episode or manic episode,” the affidavit said.

Videos shot by students and provided by a parent show Samsel talking about suicide, God and sex in a noisy classroom.

The deputy said a female student told him Samsel at one point grabbed her by her shoulders, though he was “not aggressive.” She said he asked her: “Do you have mental problems?”

A Franklin County magistrate ordered Samsel to undergo a mental health evaluation. His next court hearing is set for July 12.