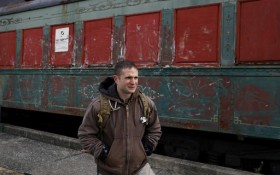 They’re house calls without the house.

Far from the sterile confines of a doctor’s office or hospital, Brett Feldman looks for homeless people where they’re most likely to be found — in wooded encampments, under bridges, along riverbanks, at soup kitchens — and treats them for ailments ranging from diabetes to trench foot, mental illness to substance abuse.

The 34-year-old physician assistant is one of the nation’s few practitioners of “street medicine,” a tiny health care niche that advocates predict will become more mainstream as hospitals and health care systems seek to cut costs, in part by reducing emergency-room visits among the homeless.

Feldman’s fledgling program is showing promise. His employer, the Lehigh Valley Health Network, about an hour north of Philadelphia, has seen the number of repeat visitors to the ER plummet. Feldman delivers primary and preventive care to about 100 homeless patients per month, treating them wherever they happen to be.

“My job is to bring comfort to them, and healing when I can,” says Feldman, wearing a backpack filled with medical supplies and bundled up against the bitter cold as he makes rounds in the sister cities of Allentown, Bethlehem and Easton.

Street medicine got its start more than 30 years ago as an altruistic pursuit of individual doctors and nurses. In cities scattered around the country and the world, they left the office and headed outside to care for the chronically homeless, a population that is generally sicker and dies far younger than people with homes.

Until recently, though, relatively few of the 60 street medicine programs that operate nationwide have been affiliated with a hospital or health system. As health networks face increasing pressure to rein in costs, that could change.

Hospitals are “probably the most front line in terms of absorbing costs that a street medicine program would save them,” says Withers, who co-founded the Street Medicine Institute in 2009. “I think it’s inevitable, but it hasn’t happened yet. … I think in the long run, it’s going to be more cost-effective to be humane.”

Behind a shuttered Allentown nightclub, Feldman meets up with Todd Hottle, 53, an intermittently homeless farmhand who likely needs hernia surgery. Hottle tells Feldman he plans to leave the hospital immediately after the procedure — the quicker to return to his tent.

Feldman urges him to stay a few extra days to heal.

“Oh, man, I don’t know. I really don’t like that place,” Hottle says, eliciting laughter from Feldman and his team. “I don’t like being locked up, penned up.”

Despite the good-natured grumbling, Hottle says he appreciates Feldman: “He comes around and he checks out everybody, makes sure everybody’s all right, brings down supplies. It’s a good deal.”

It’s a good deal for Feldman’s employer, too. The street medicine program, which is funded by grant money, including a $200,000 award from the Pennsylvania Department of Health, has reduced 30-day readmission rates to Lehigh Valley Hospital from 51 percent to 13 percent. Moreover, Feldman and his team have been able to raise the rate of insured homeless from 24 percent to 73 percent, meaning the hospital gets paid more often for the care it provides.

“It seems to be keeping those crises down so they won’t have to come in to the hospital, where it’ll cost us in multiple times more,” says Dr. Brian Nester, the health network’s president and chief executive officer.

Dr. Sheryl Fleisch started a street psychiatry program at Vanderbilt University Medical Center in 2013. Fleisch and three psychiatry residents conduct “street rounds” in Nashville, Tennessee, once a week, hiking to homeless camps and providing follow-up care to people who have been treated at the hospital for mental illness and substance abuse.

“I had an appointment at McDonald’s yesterday,” she says.

Fleisch conducted soon-to-be-published research that will show dramatic cost savings to the hospital from a decline in ER visits and readmissions, as well as a boost in the percentage of homeless with insurance. The program plans to expand to include a nurse practitioner, an internist and other medical personnel.

“We have something to offer that can be instantaneous,” Hunt says. “You can zero in pretty quick with the right approach and gain people’s trust.”

Feldman became interested in street medicine as a student volunteering at a Chicago clinic. A homeless patient told him, ‘You know, I didn’t always like to be like this. I used to be somebody. And I used to have steak every night for dinner.'”

The conversation lit a fire under him. “I didn’t think that anybody should have to feel like that,” Feldman says.

Street medicine, he says, represents the idea that “everybody matters.”

After meeting with Hottle, Feldman hits several other homeless hotspots. At a shelter, he sees Bridgete Hammerstone, 40, a recovering crack addict who has endured long stretches of homelessness.

“Someone like Brett is a blessing to me,” she says, “because he opens the door to allowing the light in for the first time in life, and it’s real special.”