Strange Biden picture just went viral (what is that?!) - The Horn News 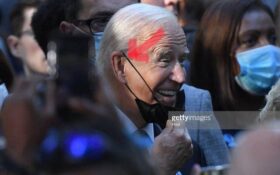 President Joe Biden has maintained a national profile for almost half a century. During that time, he’s staged some strange photo ops.

Now, there’s a new photo… and it’s a little worrying.

Last weekend, Biden went to New York to commemorate the 20th anniversary of the September 11 attacks. He was photographed while taking off his mask, and he seems to have a square tab in his ear.

WHAT THE HELL IS THAT RECTANGLE THING IN HIS EAR?!https://t.co/qMQgcz4RYn

Check out that square inner ear. Who is wearing a Biden mask? pic.twitter.com/zTUHt9fJmV

Some Twitter users were questioning whether the photo was real.

Nowadays, it’s common for bad actors to photoshop images and circulate them on Twitter. Plus, editing technology has advanced in the last five years, with the rise of “deepfakes.”

In one deepfake video, House Speaker Nancy Pelosi appeared to be slurring her words. Then, some analysts noticed the shadows failing to line up with her body, and they discovered that Pelosi’s face had simply been grafted onto a video of someone else.

However, the Biden photo comes straight from Getty Images, Inc. — a reputable supplier of stock images.

If this photo was doctored, then it was doctored before being uploaded to Getty. That would be very unusual, since Getty has taken a stand against Photoshop. In 2017, Getty banned their photographers from using photoshop in some cases, after the French government started requiring magazines to label their photoshopped images.

Plus, Biden’s ear also looks square in other, recent photos. A quick Google Image search for “Biden ear” will reveal as much.

OK, WTF was up with Joe's ear?

Biden’s ear may have turned square after plastic surgery. During the 2020 campaign, some plastic surgeons speculated that Biden had undergone a facelift. Some of them even called attention to his ear.

“Joe Biden definitely had a facelift. After reviewing photos over the years the scars along the ear cartilage (tragus) is being pulled outward,” board-certified plastic surgeon Dr. Steven Davis told OK magazine. “Most likely at least a year or so old.”

Plastic surgeons have been speculating about Biden’s appearance ever since the 2008 election cycle.

“Without any question Joe Biden had hair transplants. In fact, he had bad plugs years ago,” Dr. Barry Cohen, a plastic surgeon in Washington, D.C., told the Washington Examiner. “Subsequently, he filled in his frontal hairline to camouflage the bad Barbie-doll-esque plugs. I suspect he has regular Botox and probably filler. If he had a face lift, he needs another.”

Cohen expected Biden to avoid scrutiny despite his imperfect surgeries. After all, these procedures have become common among politicians, especially elderly ones.

“No one cares anymore,” Cohen claimed.

Still, Trump didn’t mention the facelift publicly. After all, it’s low-hanging fruit, and there’s so much else to criticize about Biden.