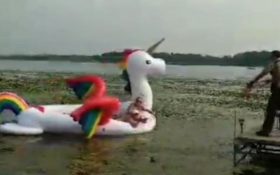 It was not a fairy tale, but a rescue on a Minnesota lake did involve a rainbow unicorn.

A sheriff’s deputy and a reserve deputy from the Chisago County Sheriff’s Office spotted a group of five women on a large, inflatable rainbow unicorn floating on Fish Lake on Saturday.

KMSP-TV reports the deputies pulled their squad car over and asked the women for a photo, but noticed the raft was stuck in weeds.

One deputy threw a rope to the women while the other recorded a video . The sheriff’s office tweeted: “With a handful of laughs and some mad rescue roping skills, they were pulled back to the dock!”

Deputy Scotty Finnegan threw the rope. He says the women would have had trouble getting out of the mucky lake unassisted.