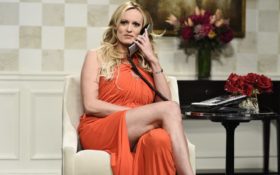 Viewers got a glimpse of what she may say to Trump if she ever got the chance, and Daniels shocked the audience by stating that Trump must resign for her to drop her unproven accusations.

She sent a threatening warning to Trump stating, “A storm’s a coming, baby,” suggesting that she has no plan to end her attacks on the president and his office.

Watch a clip of the skit here —

Baldwin’s Trump pressed Stormy to drop the case, “C’mon Stormy, stop making such a big deal about this. Everyone knows it’s just an act.”

Daniels replied, “I work in adult films — we’re not really known for our acting.”

When the fake Trump asks Daniels what she would need to “for this all go away,” she replies: “A resignation.”

Has Daniels completely lost her marbles? In no way is it appropriate to call for the president’s resignation because because of an unproven affair.

It is not unlawful adults to have affairs — so even if Trump did it, there should be no calls for his resignation.

Daniels then went on to tell the fake Trump, “I know you don’t believe in climate change, but a storm’s a comin’, baby!”

Critics believe this was Daniels’ attempt at sending a warning to Trump that she will continue to slander his name and his presidency.

In real life, Trump is still fighting off reports of an alleged affair with Daniels in the press and when asked by a reported about the scandal he replied, “All I’m telling you is that this country is right now running so smooth. And to be bringing up that kind of crap, and to be bringing up witch hunts all the time — that’s all you want to talk about.”

Trump hit the nail on the head — all the fake news media wants to cover are the ridiculous stories that ruin his reputation and put a strain on his family.

The media is a dying industry, and they have fame-seekers like Daniels to thank.