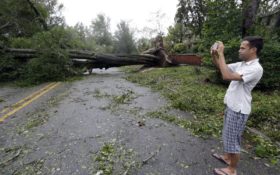 In the storm-weary Carolinas, Hurricane Michael’s approach is stoking fresh fears among homeowners who still have tarps on their roofs or industrial dehumidifiers drying their floors from destruction left by Hurricane Florence.

Thousands of homes in North and South Carolina were damaged when the September hurricane smashed trees into rooftops and pushed floodwater into living rooms. Both states are still tallying damage, and homeowners are just starting to tear out moldy carpets, toss ruined furniture and negotiate with insurance adjusters. They fear delays or further damage from the new storm, which is expected to start lashing the Carolinas on Wednesday as it moves inland.

While the Carolinas won’t get a direct hit, even a weakening Michael is expected to bring strong winds and inches of rain.

“It absolutely is a concern for me, as my house is still tarped,” said Shane Fernando, 38, who lives near downtown Wilmington where trees toppled by Florence blocked roads and fell into houses — including his. “Of course that makes me anxious.”

North Carolina Gov. Roy Cooper warned that Michael is expected to bring tropical-force winds and 2-5 inches (5-12.7 centimeters) of rain across much of the state. While the storm wasn’t expected to cause major river flooding like Florence did, he urged people to stay vigilant.

“I know people are fatigued from Florence, but don’t let this storm catch you with your guard down,” Cooper said.

The state hasn’t provided a detailed damage estimate, but it’s clear Florence affected thousands of homes. More than 24,000 homeowners and renters have received FEMA housing assistance. Some hard-hit public schools remain closed, such as in coastal Pender County, where the school system announced Monday it would not reopen before Oct. 18.

“We also have repairs beginning in many homes. A number of homes have rooftop tarps that could be damaged or blown away with this wind,” Cooper said Tuesday.

In South Carolina, Gov. Henry McMaster estimated to federal officials that Florence’s damage would top $1 billion. Earlier this month, the state said about 1,600 homes — and counting — were damaged, including 55 that were destroyed.

“The rivers will go up briefly, but they shouldn’t come near the levels after Florence,” said National Weather Service meteorologist Carl Morgan.

Michael has been the talk of Cheraw, a South Carolina town of 5,800 where Florence flooded dozens of homes.

But it’s not river flooding that worries Thomas this time around; it’s the wind and the saturated ground. Cheraw prides itself on stately elms that have lined its streets since town fathers drew up plans nearly two centuries ago.

“Any amount of wind could topple over our older trees,” Thomas said.

Back in Wilmington, tarps cover Fernando’s house where a tree crashed onto it a few miles from Florence’s landfall. He worries about new damage from Michael just as he’s drying out from the earlier storm.

“This is ironic, but we just finished the drying phase. We gutted the rooms that were affected and had industrial dehumidifiers to dry it out,” he said.

He’s working with insurance adjustors while paying for some work out of pocket with hopes of reimbursement: “That’s all still being worked out, little by little.”

In Pender County, Michael threatened to compound woes for the Cross Creek neighborhood, where Florence damaged houses. Sarah Robles’ family has been staying at her father’s house after floodwater seeped into floors, mold grew on ceilings and the windows and roof were damaged.