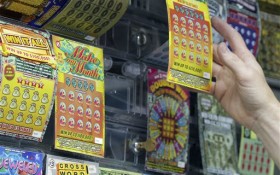 The city of Luck, Wisconsin, is living up to its namesake.

WISN-TV reported Thursday that someone bought a $15.1 million Megabucks-winning ticket at Wayne’s Food Plus grocery store in the northwestern Wisconsin city. The winning numbers were 4-6-12-17-27-28. It’s the largest Megabucks jackpot won since a $22.2 million jackpot in 2015.

The Wisconsin-only game has drawings on Wednesdays and Saturdays.