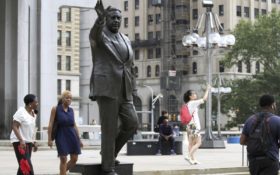 As cities across the nation continue to remove statues that aren’t viewed as “politically correct”, historians are warning, “slow down!”

The national soul-searching over whether to take down monuments dedicated to members of the Confederacy has extended to other historical figures accused of wrongdoing, including Christopher Columbus (brutality toward Native Americans), the man for whom Boston’s Faneuil Hall is named (slave trader) and former Philadelphia Mayor Frank Rizzo (bigotry).

Historians interviewed by The Associated Press offered varying thoughts about where exactly the line should be drawn in judging someone’s statue-worthiness, but they agreed on one thing: Scrapping a monument is not a decision that should be made in haste during political fervor.

“If we do this in some willy-nilly way, we will regret it,” cautioned Yale University historian David Blight, an expert on slavery. “I am very wary of a rush to judgment about what we hate and what we love and what we despise and what we’re offended by.”

Blight and other historians say the way to determine whether to remove these monuments, Confederate or otherwise, is through discussions that weigh many factors, among them: the reason behind when and why the monument was built. Where it’s placed. The subject’s contribution to society weighed against the alleged wrongdoing. Historical significance. And the artistic value of the monument itself.

Some historians also say a statue in a public place can serve an important educational purpose, even if the history is ugly, that might be lost if the monument were junked or consigned to a museum.

“By taking monuments down or hiding them away, we facilitate forgetting,” said Alfred Brophy, a law professor at the University of Alabama who has been studying the issue. “It purchases absolution too inexpensively. There is a value in owning our history.”

Monuments to Confederate-era figures have been slowly coming down around the country since the 2015 fatal shooting of nine black parishioners at a church in Charleston, South Carolina, by a 23-year-old white racist. But after the violence that erupted in Charlottesville, Virginia, this month during a white-supremacist protest against the removal of a Lee statue, other statues have been coming down in droves.

In New York, Democratic Mayor Bill de Blasio ordered a 90-day review of “symbols of hate” on city property, arguing that one of the first that should go is a plaque to Philippe Petain, a World War I hero later convicted of treason for heading the collaborationist Vichy government in Nazi-occupied France during World War II.

Activists in New York and San Jose, California, are targeting statues of Columbus, who is seen as a hero to many, particularly Italian-Americans, but a murderous colonizer to Native Americans and others.

Some question where will it end. If New York’s 76-foot (23-meter) Columbus statue is removed, then what about Columbus Circle, where it stands? And the Columbus Day holiday?

Universities, too, are removing statues. Stockton University in New Jersey pulled a bust of its namesake Richard Stockton, a slave owner who signed the Declaration of Independence.

In Boston, an advocacy group wants to rename Faneuil Hall, the Colonial meeting place nicknamed the “Cradle of Liberty,” because merchant Peter Faneuil had ties to the slave trade. In Philadelphia, a city councilwoman is leading the push to take down a likeness of Rizzo, the tough-on-crime mayor and police commissioner during the 1960s and ’70s who reigned over a police force widely seen as brutal and racist.

Also under scrutiny is a monument in New York’s Central Park to J. Marion Sims, a 19th-century physician who developed pioneering techniques in gynecology by operating on slave women.

Dr. Vanessa Gamble, a professor at George Washington University who teaches a course on racism in medicine, said if people in the heavily minority East Harlem neighborhood where the statue stands want it moved, that would be OK. But she said she doesn’t want to see it hidden away or destroyed because that would be a missed opportunity to educate the public.

“It’s important to have a discussion about Sims,” she said. “One thing I hope will start to happen is that some of the conversation around the statue gets people to think about racism in the history of medicine.”

In New Mexico, a statue of Spanish conquistador Juan de Onate is under attack because he was said to be ruthless in controlling the native population. In Chicago, protesters want to remove a likeness of aviator Italo Balbo because it was a gift from Italian dictator Benito Mussolini.

Some historians say the debate itself is a good thing.

“I find it very exciting and refreshing that Americans are revisiting their history and questioning just why we honor some people, some events, and not others,” said Don Doyle, a professor of history at the University of South Carolina. “It is a healthy reminder that history, as the search for understanding of the past, must always challenge public history as monuments and hero worship in the public sphere.”