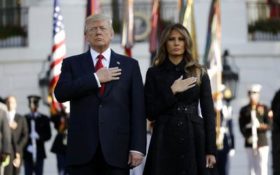 It was a bittersweet moment, but perhaps a relief too: she may have weathered more libel, slander and bullying from liberals than anyone else in the Trump administration.

Few have the capacity to be subjected to that level of scrutiny.

But according to Washington Examiner sources, Trump has potentially found his woman to replace Huckabee Sanders. And if so, he won’t have to go far to get her. She’s currently in the East Wing.

Stephanie Grisham, spokesperson for First Lady Melania Trump, has emerged as a frontrunner for the job.

This lesser-known aide in the White House has been described by many reports as a hard-nosed and dedicated official, who began serving on the Trump campaign staff in 2015.

The Washington Post once labeled her “Melania Trump’s enforcer.”

Daily Wire reports from one White House source that Grisham is a “stone-cold killer,” and a “risk-free move for the administration in the run-up to perhaps the most important election in American history.” The speculation intensifies as Trump is scheduled to relaunch his campaign Tuesday evening.

“She holds down the East Wing with ease and has no loyalties to any faction within the Republican Party,” the source added in speaking with Daily Wire. “Members of the first family love her and know that she is fiercely dedicated and loyal.”

Above all, Trump is likely to reward Grisham for her loyalty to his agenda. Because not only has the president been subjected to unfair treatment from Democrats, he has also been faced with quiet push back from within the GOP as well, although his policies are producing record gains in America.

But in Grisham, it sounds as though he’d be recruiting a leader who is committed to winning on key issues that Trump promised Americans.

You can listen to Trump speak about the replacement candidate below:

Trump on Scaramucci: “Well I like Anthony and he’s been very nice and all but I think Anthony should stay where he is right now”