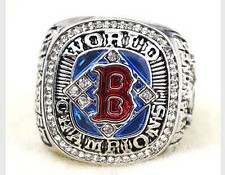 Quincy police had been watching the home for several months, and on Tuesday they executed a search warrant after witnessing a drug deal.

Dougan says the ring belongs to a team employee, not a player or coach. The Red Sox broke an 86-year World Series championship drought in 2004.

The man who lives in the home and two men to whom he allegedly sold pills are expected in court Wednesday.

Dougan says it’s unclear how the ring ended up in the home.