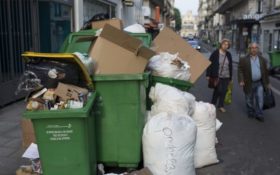 A bronze goose statue stolen from a St. Paul park has reappeared — at a recycling center.

The statue was reported stolen from its pedestal in a fountain in Cochran Park on Sunday, according to the St. Paul Pioneer Press. It’s unclear when it was actually removed.

The statue reappeared at a St. Paul metal recycling center on Monday and turned over to city staff. The base had sustained minor damage but the statue itself was unharmed. An investigation is underway.

The goose is 28-inches high with a 19-inch wingspan. It’s one of four goose statues in the fountain. They ring a sculpture called “Indian Hunter and His Dog,” created by Paul Manship in 1926. The geese were installed around that statue in 1927.