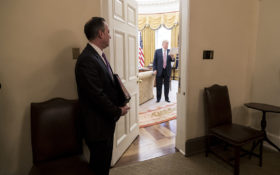 U.S. investigators are heading across the Atlantic ocean — and they have questions about former President Barack Obama’s investigation into Donald Trump’s 2016 campaign they want answered.

The Times (UK) is reported that former MI6 agent Christopher Steele, who authored the now-debunked Steele Dossier, has agreed to be questioned by investigators from the United States that are looking into the way the Obama administration conducted their “spying” on Trump’s election campaign.

Steele will be expected to fess up to some answers about the report’s undocumented claims. Steele bought himself two years with the Mueller investigation — but U.S. investigators are going to finally get their answers.

In a way, Steele holds all the cards — and it could be bad news for Obama, Hillary and the rest of the Democrats. If Steele knows more than he originally said, it could mean a big break in the investigation.

What began the Mueller investigation could ultimately end up being what sends Obama’s pals straight to jail.

We know that Attorney General William Barr said the evidence he’s seen so far on how the Obama administration went about getting a wiretap of Trump doesn’t make much sense to him.

“I assumed I’d get answers when I went in,” Barr told CBS last week, “and I have not gotten answers that are at all satisfactory.”

Only more questions have risen as result, Barr said. So he’s putting the pressure on witnesses to cooperate.

According to The Epoch Times Steele agreed to speak with the Department of Justice (DOJ) after learning that unflattering reports of Steele are likely to be released by the inspector general.

Perhaps he sees this as a way of clearing his name. After all, he has nothing to lose here. Steele just has to show up and share his information.

Though Steele was once working with the Democrats’ interests in mind, now he’s trying to protect his own backside.

If he has damning information — and he wants his name cleared — liberals could be in a world of hurt.