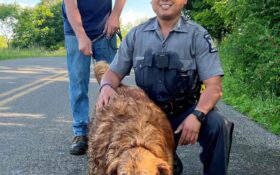 A missing golden retriever named Lilah, discovered deep inside a culvert pipe in upstate New York, could not be lured out by her owner with peanut butter dog treats or cheese.

In the end, State Trooper Jimmy Rasaphone decided to crawl about 15 feet (5 meters) into the pipe under a rural road to rescue Lilah, despite the extremely tight fit.

“He crouched down and literally disappeared into the hole with a lead that had a choker on it,” said Lilah’s owner, Rudy Fuehrer, who called 911 for help on Sunday morning. “He was able somehow to manipulate his arms and get the choker around the dog’s head.”

The trooper and retriever both emerged soaking wet, but safe.

The 13-year-old dog had been missing since Friday afternoon. Fuehrer was walking his two other dogs — both Lilah’s offspring — a few hundred feet down the road from his house Sunday when he heard a plaintive yelp.

Fuehrer, who lives near Binghamton, tried the get the weary and confused dog out but eventually called 911.

Rasaphone and his partner showed up within minutes. Rasaphone said he’d go into the pipe since he was the smallest of the three of them. Fuehrer estimates the pipe’s diameter was under 2 feet (60 centimeters). He was able to pull Lilah out after Rasaphone emerged.

Fuehrer said he was grateful Rasaphone had the compassion and initiative to go nose-to-nose with his dog in a drainage pipe.

And he said Lilah is recovering nicely and out walking.

“Needless to say, I took her out on a leash,” he said, “because I didn’t want any more escapades.”