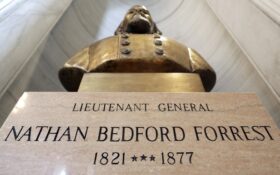 A state commission voted overwhelmingly on Tuesday to remove a bust of a Confederate general and early Ku Klux Klan leader from the Tennessee Capitol, marking a key victory in a decades-long fight over the controversial sculpture.

Yet it could still be months before the Tennessee Historical Commission signs off on the final go-ahead to relocate the Nathan Bedford Forrest bust from the Capitol to the Tennessee State Museum.

The commission, voting 25-1, agreed the bust should be moved just north of the Capitol building to the state’s museum, noting it was better equipped to furnish the appropriate historical context. The panel heard hours of testimony largely in favor of the bust’s removal before voting.

The commission noted there still remains an opportunity for those opposed to the bust’s removal to go before a court to demand a review. If no review is requested, the removal plan becomes effective 120 days after the decision is posted on the commission’s website.

In recent years, statues and memorials to Confederate figures have been removed from many communities by authorities or forcibly removed by protesters who see in them hated symbols of racism and discrimination from the conflict that led to the end of slavery.

Forrest’s bust at the Capitol was first unveiled in 1978 and has stirred strong opposition for decades.

Forrest had amassed a large fortune as a plantation owner and slave trader in Memphis before the Civil War broke out. A Confederate cavalry general during the war, he became a post-war leader of the Klan, which terrorized Black people and sought to reverse Reconstruction efforts and restore white supremacy.

“Forrest represents pain, suffering and brutal crimes committed against African Americans, and that pain is very real for our fellow Tennesseans as they walk the halls of our statehouse and evaluate how he could be one of just the nine busts elevated to a place of reverence,” Gov. Bill Lee said in a record video message during Tuesday’s meeting.

Along with the Forrest bust, the Historical Commission agreed that the busts of David Farragut, a Union military leader, and U.S. Navy Admiral Albert Gleaves be moved from the Capitol to the state museum. The decision was that state and federal officials should be honored at the museum rather than in the Capitol.

Lee initially resisted calls to relocate the Bedford bust just before taking office in 2018, telling The Tennessean at the time that “the Ku Klux Klan is a part of our history that we’re not proud of in Tennessee, and we need to be reminded of that and make certain that we don’t forget it. So I wouldn’t advocate to remove” the bust.

Yet by 2020, he said he wouldn’t oppose adding context to the Forrest bust and has since said the opportunity for “full context” on Forrest is available only in the state museum.

Tennessee’s Black legislative caucus has particularly been vocal how painful it has been to walk by the bust, displayed prominently between the House and Senate chamber, as they carry out their work each day.

“Every person who enters the Capitol — the people’s house — should feel welcome,” said House Minority Leader Karen Camper, a Black woman from Memphis. “The State Museum is the appropriate place to discuss and study the life and exploits of Nathan Bedford Forrest. He should not hold a place of honor in the State Capitol.”

Meanwhile, the top two legislative leaders inside Tennessee’s GOP-dominant Statehouse have remained adamant that the Historical Commission has no authority to approve of the removal because it did not first have approval from the State Building Commission.

Senate Speaker Randy McNally and House Speaker Cameron Sexton — who are both white — have requested a legal opinion from the Attorney General’s office on that matter as well as whether the Legislature is ultimately in charge of the removal.

It’s unknown if that dispute will slow down the removal of the Forrest bust.