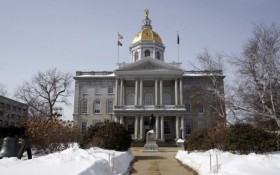 An 80-year-old New Hampshire legislator with a lung problem has been told not to bring his portable oxygen concentrator with him to the Statehouse because it creates a safety hazard.

The Valley News reports Rep. Ernie Bridge, a Unity Republican, says he’s required to be on a concentrator 24 hours a day after suffering a small “leak” in his lung in January.

Bridge says the House’s sergeant-at-arms told him that the oxygen tank couldn’t accompany him to his assigned seat about three weeks ago. Bridge said he asked for an aisle seat, but those are usually reserved for House committee chairs and senior leaders, not first-term legislators such as Bridge.

“If I can’t get to my seat to push the button (to vote), I’m not much good,” said Bridge, who is no longer driving the 50 miles to Concord and has decided not to run for re-election.

Jim Rivers, a spokesman for Speaker Shawn Jasper, says Jasper “makes every attempt to accommodate our members who have health issues.”

Rivers said the concentrator posed a safety hazard to other legislators and possibly blocked their route to emergency exits.

“Even if he had an aisle seat, the rolling piece of equipment that he had could not be left in the main aisle,” Rivers wrote in an email.

Rivers wrote that the 400-member House has allowed some members using oxygen tanks to sit in their assigned spots, and the body also provides special seating to others. The National Conference of State Legislatures says that the average age of a lawmaker at the New Hampshire Statehouse is 66, about a full decade older than the national average. Members of the citizen Legislature are paid $200 per two-year term, plus mileage costs.

“The Speaker makes every attempt to accommodate our members who have health issues,” Rivers wrote. “By asking for a chair in the rear of the hall, accommodations could be made to record his vote. But, as I understand it, that request was never made.”

Bridge said he didn’t discuss the seating issue with Jasper’s staff that day. He didn’t want to make a scene or cause any embarrassment.

Rep. Steven Smith, R-Charlestown, said he heard of Bridge’s problems in the House last week and submitted a request with the House health office, so they can determine how best to accommodate Bridge.

“It isn’t something that happens the moment you ask,” Smith said, adding that the office can take weeks before deciding whether a legislator needs a seat change.

Bridge says it’s unlikely that he’ll attend House sessions in Concord until he knows he’ll be able to vote. Without Bridge’s presence, voters in Unity and Newport are down a legislator.