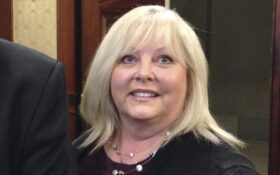 Federal prosecutors announced Friday that a grand jury returned a superseding indictment this week alleging that Rep. Tricia Derges, a Republican from Nixa, filed claims for nearly $900,000 in federal funding for COVID-19 treatments that were not performed or had already been paid.

The new charges were unsealed Friday during Derges’ arraignment. She pleaded not guilty to all charges.

The 20-count indictment filed in February alleged Derges falsely promoted a treatment she was selling at medical clinics as containing stem cells that could treat various diseases, including COVID-19.

Friday’s indictment charges that Derges applied for $882,644 in CARES Act funding for Lift Up, a nonprofit medical and dental clinic in Springfield that serves the poor, homeless and uninsured.

Derges, an assistant physician, received $296,574 in funding for the clinic, which did not provide any COVID-19 testing for patients and was closed between March and June 2020, federal prosecutors said. She allegedly transferred those funds to her for-profit clinic, Ozark Valley Medical Center, which had already been paid by clients for COVID-19 testing, prosecutors said.

Derges, who was elected in November, did not respond to messages left at her legislative or campaign offices.

Derges’ attorney, Al Watkins, said the indictments indicate that federal prosecutors are not doing proper due diligence or performing at their normally high standards of professionalism in this case, which is harming tens of thousands of Derges’ patients in southwest Missouri.

“She has no plans to do anything but continue to diligently discharge her duties as an elected official and represent her constituents,” Watkins said. “And she has no plans to stop her professional calling, which is deeply rooted in her faith.”

“But more immediately, it raises deep concerns about whether she should be casting votes that will determine how Missouri allocates its share of those relief funds,” Quade said in a statement. “Given the situation, it would be appropriate for her to recuse herself from voting when the House debates the state budget next week.”

Prosecutors claimed Derges said in a Facebook post that the treatment could provide a potential “safe and natural” cure for COVID-19 patients.