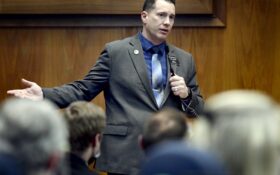 The North Dakota House on Thursday voted to expel a lawmaker accused of threatening and sexually harassing women at the Capitol, the first time in state history a lawmaker has been expelled.

Members voted 69-25 to expel Rep. Luke Simons, a Republican from Dickinson, for a pattern of behavior they said stretched back to soon after he took office in 2017. The expulsion came with strong support from Simons’ own party, which holds a supermajority in the chamber.

Majority Leader Chet Pollert, who co-sponsored the resolution to expel, said Simons had been given “multiple chances to avoid being in this situation.”

“There is only one way to make this behavior stop and that is to expel Rep. Simons from this House,” Pollert said.

Simons, who denied wrongdoing, was defiant before the vote. He blamed accusers for “twisting my words,” said any other lawmaker could be in his position and complained that he wasn’t being afforded due process.

“I could make any accusation against any of you,” Simons said ahead of the vote. “Under this circumstance we are under, you’re guilty.”

Surrounded by his family and friends following the vote, Simons said he believed he would have had “a lot more support” from his fellow lawmakers.

Lynn Boughey, his attorney, said he may argue the case in court but would leave that up to Simons “after he talks with his family.”

Simons is accused of a pattern of sexually aggressive, lewd, and threatening behavior. Republican Rep. Emily O’Brien said his harassment was so pervasive that she switched desks to get away from him.

“Prior to coming forward, I struggled with whether this was something I wanted to relive,” she told fellow House members. “It is hard to rehash the unwarranted, disturbing and uncomfortable experiences. I think ‘shame on you, Emily O’Brien, for not coming forward and being a voice for others.’”

A 14-page document compiled by the nonpartisan Legislative Council includes allegations that Simons made “advances” toward female staffers and interns, commented on their appearances and tried to give one staffer an unsolicited shoulder massage. One staffer described his behavior as “really creepy.”

The council this week released two additional documents alleging inappropriate and bizarre behavior by Simons, a 43-year-old rancher and barber who is married and has five children. One woman said Simons referred to her as “that pretty one,” and insulted her husband, “saying that usually women who are classy dressers like myself are married to shmucks like my husband.”

The woman, whose name was redacted in documents, also alleged that Simons once placed his lunch box in her office before leaving to use the restroom and said, “bet you hope there’s not a bomb in there, huh?”

Republican Rep. Shannon Roers Jones, an attorney, said on the floor Thursday that the move to remove Simons is about inappropriate behavior, not about targeting a political ideology, as Simons has alleged. Simons is a member of the loosely organized Bastiat Caucus, a far-right group that supports limited government and gun rights. Much of Simons’ proposed legislation over the years reflected that.

“We have moved women away from him, we have limited his ability to work with them, but in doing that we are also punishing the women,” Roers Jones said. “When we move women or restrict who they work with, we are limiting a woman’s ability to do her jobs, and thereby limiting her ability to advance because of the actions of one member.”

Democratic House Minority Leader Josh Boschee of Fargo, who co-sponsored the resolution, looked at Simons and said, “You have hurt people. You have hurt the integrity of the legislative assembly.”

The North Dakota Constitution says either chamber can expel a member with two-thirds approval. That meant at least 63 members had to approve the resolution to expel Simons. Republicans hold an 80-14 advantage in the chamber.

Opponents of the resolution said the process was flawed and that Simons was not afforded due process. Pollert said the process to expel Simons went “above and beyond what is legally required.”

GOP Rep. Rick Becker, who heads the Bastiat Caucus, argued that Simons’ behavior didn’t warrant expulsion and sought to amend the resolution to censure him instead. That failed, 66-28.