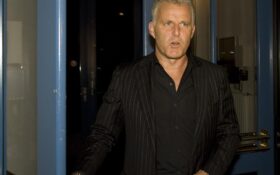 Peter R. de Vries, celebrated for his courageous reporting on the Dutch underworld, was fighting for his life in an Amsterdam hospital after the Tuesday night shooting.

Two suspects remained in custody Wednesday, a 35-year-old Polish citizen living in the Netherlands and a 21-year-old Dutchman, while a third person detained Tuesday night was let go, according to a Dutch police statement. Their first court appearance was scheduled for Friday.

The motive for the attack was not disclosed.

The shooting was seen as a national tragedy in the Netherlands, and dozens of people brought flowers to the scene of the attack, less than a block from the capital’s famous Rijksmuseum. Some said it shook their sense of security and raised worries about respect for the rule of law.

Dutch King Willem Alexander called the shooting “an attack on journalism, the cornerstone of our constitutional state and therefore also an attack on the rule of law.”

It also struck a chord elsewhere in Europe, where such brutal attacks on reporters are rare and where the killings of journalists in Slovakia and Malta in recent years raised concerns about reporters’ safety in developed, democratic societies.

“We might disagree with a lot we see in our media, but we have to agree that journalists investigating potential abuses of power are not a threat but an asset to our democracies and our societies,” European Commission President Ursula von der Leyen told European Parliament lawmakers Wednesday.

De Vries, 64, is the Netherlands’ most prominent journalist, vaulting to fame after he covered the kidnapping of a Heineken heir in 1983. He’s a regular on evening news programs and has continued to break stories about the Dutch criminal underworld. He won an International Emmy in 2008 for a television show about the disappearance of U.S. teenager Natalee Holloway while she was on holiday in the Dutch Caribbean island of Aruba in 2005.

“Yesterday our worst nightmare became reality,” de Vries’ son Royce tweeted on behalf of the family. “We as a family surround Peter with love and hope during this difficult phase. Much is still uncertain, but what is certain is that all expressions of support from all over the country now offer enormous support.”

De Vries had long been considered a possible target of the criminals he doggedly reported on. Police and prosecutors would not comment on whether he had police protection.

De Vries had recently been acting as an adviser and confidant to a witness in a major trial of the alleged leader of a crime gang, Ridouan Taghi, who was extradited to the Netherlands from Dubai in 2019. Taghi is currently in jail while he stands trial along with 16 other suspects.

Liam Bakker, an Amsterdam resident who lives near the site where de Vries was attacked, described hearing three or four shots and then rushing to see what happened.

“We came out and saw him lying on the ground… bleeding,” Bakker said, still rattled the next day.

He was among those paying homage at the impromptu memorial site Wednesday on a quiet, brick-lined street. A student from the nearby University of Amsterdam called it “horrible.” Another woman, two generations older, set down a bouquet of sunflowers saying, “It’s a shame, it’s terrible.” A man on a bike said he came simply because he “wanted to do something.”

Media watchdog Reporters Without Borders expressed “full solidarity” with de Vries’ family and all Dutch journalists on Wednesday, and called for those responsible for the shooting to be brought to justice.

Lawmakers and officials in other European Union countries also spoke out. European Council President Charles Michel called the shooting “a crime against our fundamental value of freedom of the press.”

The commissioner for human rights at the Council of Europe, Dunja Mijatović, tweeted, “Everything should be done to bring perpetrator(s) and mastermind(s) of this horrific crime to justice and ensure #SafetyOfJournalists in #Europe.”