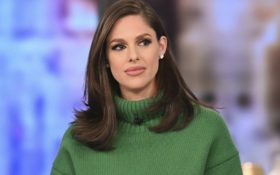 Abby Huntsman, a panelist on ABC’s daytime talk show “The View,” said Monday she’s leaving to help run her father’s campaign for governor of Utah and spend more time with her family.

Huntsman joined the show in September 2018 and her departure will leave Meghan McCain as the show’s only real conservative voice.

While “The View” features celebrity guests, it is becoming best known for its fiery political talk and is an important stop for presidential candidates looking to reach an audience dominated by women.

Jon Huntsman announced in November that he would be seeking a third term as Utah governor, although he hasn’t done that job for a decade. He’s spent time as U.S. ambassador to Russia in the interim. He asked his daughter to be a senior adviser to the campaign.

“I told my dad, if ‘The View’ taught me anything, it taught me how to fight,” Huntsman said.

Her last day will be Friday.