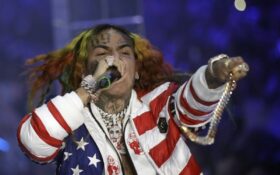 A man convicted in the kidnapping of rapper Tekashi 6ix9ine was sentenced to 24 years in prison Wednesday by a judge who cited his leadership role in a gang active nationwide.

U.S. District Judge Paul A. Engelmayer announced the sentence for Anthony Ellison, 33, who has been incarcerated at a federal lockup in Manhattan.

During a two-hour proceeding, the judge repeatedly cited the July 2018 kidnapping of Tekashi 6ix9ine and Ellison’s slashing of another man’s face that left him permanently disfigured.

Engelmayer called Ellison “cruel and vicious” for “slicing open a man’s face” even though the man was not involved in a shooting Ellison was trying to avenge.

Prosecutors said in a written court submission that the attack left the man with a scar from his ear to his chin, an injury so gruesome that Ellison’s lawyers succeeded in getting some of the images kept from jurors.

Prosecutors said Ellison was a leader of a violent faction of the Nine Trey Gangsta Bloods.

“I’m not an angel but I’m not a monster,” Ellison told the judge. “I do have faults. I am human.”

After his own arrest, Tekashi 6ix9ine — whose legal name is Daniel Hernandez — pleaded guilty and became a cooperator.

At Ellison’s trial last year, the rapper testified about his involvement with the gang. He described the kidnapping, saying Ellison and another man forced him into a stolen car at gunpoint. He said the men drove him around, stopping sometimes to beat and taunt him as he begged for his life.

The men ultimately took him to his Brooklyn home, where they stole a bag full of jewelry before driving him a few blocks away and releasing him, he said.

In 2018, Tekashi 6ix9ine had a multiplatinum hit song, “Fefe,” with Nicki Minaj, which peaked at No. 3 on the pop charts, and “Stoopid,” featuring imprisoned rapper Bobby Shmurda.

In April, Tekashi 6ix9ine began serving home confinement for the last four months of a two-year prison term he was given for his role in a drive-by shooting in New York that he committed when he was with the gang. Weeks later, he released a new video, “Gooba.”