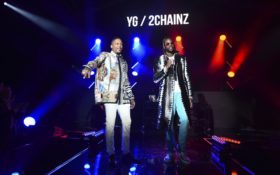 Authorities say they searched the Los Angeles home of rapper YG in connection with a deputy-involved shooting in Compton earlier this month.

A Sheriff’s Department spokesman says the rapper, whose real name is Keenon Jackson, has not been implicated in the shooting and was not home at the time of the search Thursday.

Authorities have said 65-year-old Ricky Cornell Starks was killed in the July 3 shooting, though it’s not clear if he was shot by a suspect — who was driving a Cadillac Escalade registered to Jackson and firing at deputies with an assault rifle — or by deputies.

Deputy Marvin Crowder says several people were detained Thursday but none has been arrested.

Crowder says there is “no concrete link” between Jackson and the shooting besides his vehicle.